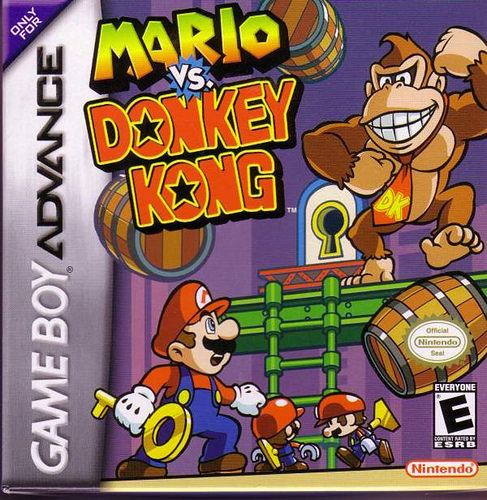 After many years, I have finally been able to play the legendary Mario vs DK game. I actually always thought that it was in the same style as the original Donkey Kong and was surprised to see whole levels and puzzles in this one. The final boss is the only level that is just like the old game. It was cool to see such variety though and it’s a pretty fun game. There is also quite a bit of bonus content to be found here as well. I have one issue with how you obtain stars in this game, but beyond that it’s a solid experience.

The plot is that DK has decided to steal all of the toys for himself. Mario doesn’t take too kindly to this and calls DK a big monkey as an insult several times. Seeing as how this doesn’t work, Mario decides to beat DK down until the monkey finally gives in. Will DK let go of his toys or will Mario have to hit him with a clean uppercut? Only time will tell. Meanwhile, the Mario toys are fairly advanced and seem to have some rudimentary A.I. going for them.

There are 6 main worlds to the game and each one has 8 levels. This makes for a decently long campaign. It should take you a few hours to complete the game in total and add a few depending on how difficult the puzzles can get. There is an extensive amount of replay value to be found as well since beating the game unlocks 6 Plus worlds. After this you unlock the X levels. Once you complete those, then you can face the true final boss and unlock the ultimately true ending. I believe you need to get all of the Stars to make it this far so that should really take a while. The game has an unbelievable amount of bonus content in it so you’ll b getting your moneys worth.

Now, I originally thought that to get a star for a level you just had to complete it while holding onto the three bags in the level. It turns out that you actually have to beat the level’s high score to do it which is a little annoying. It’s hard to know how to do such a thing so repetition is your best bet. Just keep playing until you can really ace the level. It’s a little harder than I’d like and I still think grabbing the bags will be enough. It does help raise the difficulty once again though.

The graphics are pretty solid for the GBA. It’s certainly a AAA title as the competitors wouldn’t really be able to match this. It’s that golden era in Nintendo where all of the character models are right. There was only one boss level where I couldn’t even see the ladder so I died a few times. It was more of an optical illusion than an issue with the graphics though. As you’d expect from a Mario game, the soundtrack is quite solid. I particularly like the Fire Mountain themes, but the game has a good variety to it. Most of the level themes are quite good and it certainly amplifies the quality of the game. You’re able to play the level over and over again because you have good beats to listen too. It helps that the loading times here are great so you never have to wait for long.

Even the story felt like it had more effort to it than you’d expect. Mario talks quite a bit here, certainly more than I expected. He may be a bit meaner than usual as he calls DK a big monkey at times, but this is the plumber who calls you stinky in Mario Party. It’s easy to forget that Mario wasn’t always the very chipper guy that he is today. Even the Mini Marios rub the loss in DK’s face as they laugh at him quite a bit. You end up almost feeling bad for the monkey by the end. He certainly didn’t ask for this. Of course, DK is a robber so he ultimately did bring this upon himself. You gotta just live with the consequences. I only got the first ending, but at least it gives DK a fighting chance as he grabs more toys and runs. Mario’s going to need to hire more security even if it hurts the whole budget cuts angle.

The gameplay is sort of like a 2D Mario adventure, but you’re stuck in a limited space. There are two acts to each level. The first act has you hit a bunch of switches and get past obstacles to bring a key over to the door. In the second act you just need to get to the Mini Mario. The gameplay is actually quite spread out and diverse. You have an array of many different jumps to use. I personally liked spamming the dash dance jump as it would give you a lot of height and you could cheese many levels with this. I’m sure that the developers really thought the level designs through but with this many different options it makes sense that you would be able to cheese parts of it. They just can’t expect to cover for every contingency.

There are also the Mini Mario levels. There is one of them in every world and they’re a nice change of pace. The little guys get lost rather easily so you have to make sure not to go too fast or you’ll leave them behind. I enjoyed the levels in this format that I played and while the main ones were certainly more fun, it’s always satisfying to lead the little guys to the goal. The Mini Marios have heart.

It’s relatively simple gameplay which is likely what makes it so fun. It’s only half brain teaser while the other half of the puzzle is having the ability to physically get through the obstacles. It’s a great blend and a lot of fun to play. The game does a good job of bringing in many different enemies and obstacles so that the levels don’t feel the same. It would have been nice to have seen classic characters like Luigi and Peach, but I suppose even Mario has to work alone sometimes. It’s probably nostalgic for him to be the lone hero like in the original Donkey Kong game.

Overall, I’d definitely recommend this title. It’s easy to see why it became so popular. The game’s just a lot of fun and it even has some cutscenes. It’s pretty impressive since the game is so old. The graphics and soundtrack are both on point as well as the level designs. There is a lot of replay value here and my only complaint is that getting the stars in the levels to unlock the final bonus ones is maybe a little too tedious. I’d like to have a clear metric so I know exactly what I have to do in order to clear the level. That seems a little more fair if you ask me. Maybe they’ll implement that in the sequel. I’ll certainly buy that one although it could be a little while until I do. In the mean time, buy this one and let me know what you thought of it.