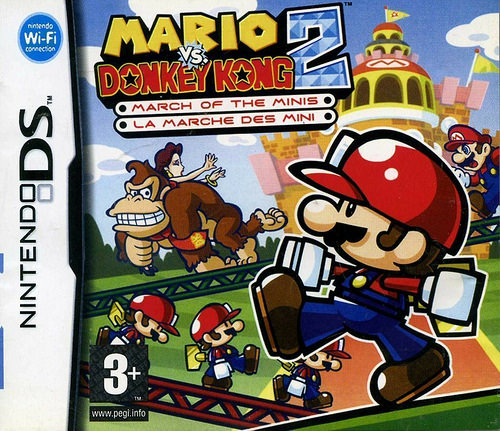 It’s been a little while since I played the original Mario vs Donkey Kong so it was finally time to check out the sequel. Unlike the first game which used a mix of Mario and Mini levels, this one double down on the Minis. They’re definitely fun to play around with so while you will probably miss the standard levels, the Minis can hold their own game. It’s a fun sequel that gives you what you expect from this series.

The plot is that Mario dolls are selling really well while nobody wants the Donkey Kong ones. Pauline even grabs the Mario one while DK watches to rub it in. In return DK kidnaps Pauline and Mario was so busy antagonizing him that he didn’t have enough time to save her. Instead Mario sends in the Minis, but can they really hope to stop the legendary Donkey Kong? This guy packs a punch so they will have to use their sheer numbers and skill to put a stop to him.

This time around the gameplay uses the stylus the whole time as this is what allows you to control the Minis and to set off stage hazards. You must guide the 2-4 Mini Marios to the door which signals the end of the level. You win as long as one Mario survives, but naturally you get bonus points if you can get multiple Marios to the end. There will also be vines which you have to lure other enemies to destroy, springs to jump on, and many enemies that you can ride. The levels will usually allow you to get used to the hazards before they throw you in. The game never gets all that difficult though so you should have no problem getting through.

There are 8 worlds with each world having 9 normal levels in addition to a Mini level if you found all of the cards and a boss level as well. Then there are 2 final levels if you have gotten enough collectibles. Interestingly enough all of the boss fights except for the final one are the same fight, but with some added twists. You’re always trying to launch the Marios high up in order to either hit DK or cause something to fall on him. It may have been a stylistic choice to have the bosses be the same or a budget one, but it’s a pretty fun boss concept either way. Bouncing the Marios off the walls while trying to avoid the critters is just as tricky as it sounds.

The graphics look nice and colorful as you’d expect from Mario. The levels are all fairly compact and so the game doesn’t really need to go all out. Most of the objects and enemies are fairly similar so it likely wasn’t too hard to get all of the character models polished. As a result I would definitely expect everything to look good and it does so there’s definitely no issue. Nintendo always tends to deliver here. The soundtrack is fairly bland for a Mario game though. There aren’t really any memorable themes to be found here. You’ll likely be too focused on controlling the Marios to really notice this though.

After beating the game you do have some replay value when it comes to unlocking all of the bonus levels. You’ll want to get gold ranks on all of the stages and collect all of the cards for bonus Mini levels. Grabbing the cards is a fairly easy task, but good luck going for the golds. The game really expects you to earn them as nabbing the gold basically means that you have to play the stages perfectly. I actually think that this is the reason why beating the game was surprisingly very easy. Nintendo decided to make it so that you could breeze through the story and see the ending, but getting the gold medals would be the challenge. A lot of the levels start you off with at least one Mario right by the goal so you would be guaranteed to win, but if you wanted the rest of the Marios to survive then you would have to actually play the level and use teamwork to get through. Moving one Mario is easy enough, but coordinating all of them will likely take some practice.

I do have to quickly say that Mario looks rather iffy in this game. I still say that he was really antagonizing DK in the opening cutscene as he grins while Pauline holds his doll. That’s fine since of course he’d be thrilled, but he’s grinning directly at DK as the ape’s doll is completely ignored. He seems fine at the end and Pauline probably goes a little overboard when trying to make DK feel better, but I just can’t forget the opening. Something tells me that Mario is still holding a grudge with DK over some of the things that happened to them back in the day. I wish I didn’t have to put Mario on blast like this, but I can’t come to any other conclusion.

Overall, Mario vs Donkey Kong 2 March of the Minis is a fun sequel to the original. The original game will still take the win due to not having to rely on touch screen controls and having some normal Mario levels as well, but this one does a good job of operating well with the stylus. You will rarely if ever die because the game couldn’t read your swipe and you’ll probably end up grabbing a lot of cards along the way to beating the game normally. By then you may find yourself wanting to grab the final cards just so you will have truly completed the game. If you’re a Mario fan or just like brain teasers then this is the game for you. It’ll force you to always be thinking 3 steps ahead.