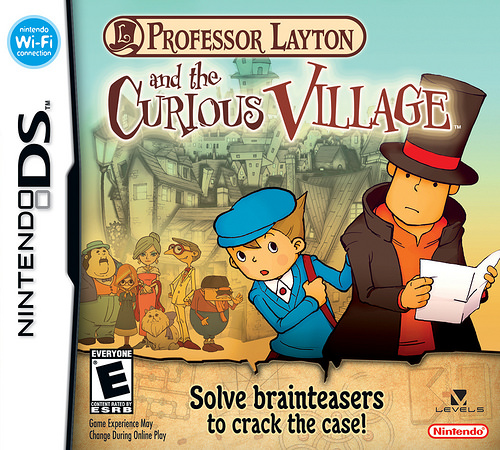 This game was stuck on the backburner for a very long time. That final puzzle was just insane and I had to quickly confer with the Gamefaq experts. In the end, I do think it was a fair puzzle though as the squares all seemed rather legitimate. This is a puzzle game that actually handles them really well and the game never felt unfair or unbalanced. It’s one that I’d highly recommend and you’ll find it hard to put the game down once you have started.

The tale follows Professor Layton and his sidekick as they enter a mysterious village. There is something wrong with the place as people disappear or seem to be murdered and then show up the next day. If they want to get to the bottom of this, the heroes will have to solve a lot of puzzles and make their way to the suspicious tower. Luckily Layton is a gentleman so he knows how to handle every situation thoughtfully and with purpose.

Layton’s gameplay is rather easy to understand. You click on various objects to see if they have puzzles or hint coins. Each hint coin allows you to unlock a hint for a puzzle, but you have to spend them wisely as each puzzle has 3 hints, but there are more puzzles than coins. As such, you should only use them on puzzles that you really can’t figure out or you will have used them up on all of the easy ones. I was able to achieve a very nice balance as I had coins whenever I had need of them. Even with the 3 hints, the final puzzle was a little too much though. You’ll never have to do anything complex as the puzzles are purely about figuring things out as opposed to any sort of platforming.

The actual plot was interesting enough. Layton makes for a good lead and he’ll remind you of the Adam West version of Batman. He’s very down to Earth and always considers everything. His young apprentice isn’t quite as wise yet, but he’s learning and always makes sure to complement Layton. There are a host of supporting characters who all seem rather suspicious. As with any good mystery novel, you can’t really trust anyone here. The main villain is also reasonably good although he’s not too charismatic. I wouldn’t mind not seeing him in the sequel since he doesn’t add much to the game, but he’s not bad either. he did add a touch of danger to the climax so I’d say that was a good thing. The train plot will probably be a little better for me as I like a good ride. I have heard that the sequel is shorter though which is a little concerning, but I’m sure it’ll be long enough.

The graphics were certainly acceptable here. It’s the kind of game where graphics don’t really mean all that much and aren’t given a chance to show off either way. There were some fully animated cutscenes though so those looked sharp and a lot of DS games don’t even have that so it was impressive. The stills looked good as well and all of the characters were on point so I’m definitely satisfied with how it all went down. The music is rather boring, but it’s probably meant to be that way so it doesn’t get in the way of your puzzle solving abilities. You’re not really playing this for the music after all, though I am of the opinion that fast paced rock music would actually add to the experience.

There is certainly some replay value here as you can go back and try to solve all of the puzzles. I found a bunch of them, but didn’t actually solve them all. I left the most challenging ones of course and I expect that you would do the same in the game. As such, there is guaranteed to be something to do and the game should easily crack 20-30 hours by the end. The actual game’s length I’d say is probably around 10-12 hours, but it took me 16 because of that final puzzle which I spent hours and hours on. I just didn’t want to surrender, but in the end I have to admit that it defeated me. I have a feeling that a rematch would go quite differently though and I aim to prove that in the sequel.

Overall, Professor Layton and the Curious Village is a great game. It’s just really fun and I could play it for hours and hours. There is really something to be said for simple puzzle games or any game that has a very clear and easy to understand objective. No matter how hard the individual puzzles may be, it’s not as if you’ll ever be lost and wonder what you have to do next. The challenges are straight forward and it’s simply up to you to meet them head on. I look forward to playing the next title as I already own it and will be tackling it very soon. The game is very streamlined all the way through and it’s easy to pick up and play. It can hold its own against just about any other game and is easily the best puzzle game. I want to play Ace Attorney someday to see how it stacks up even if both games are quite different. They’ve always been natural rivals.