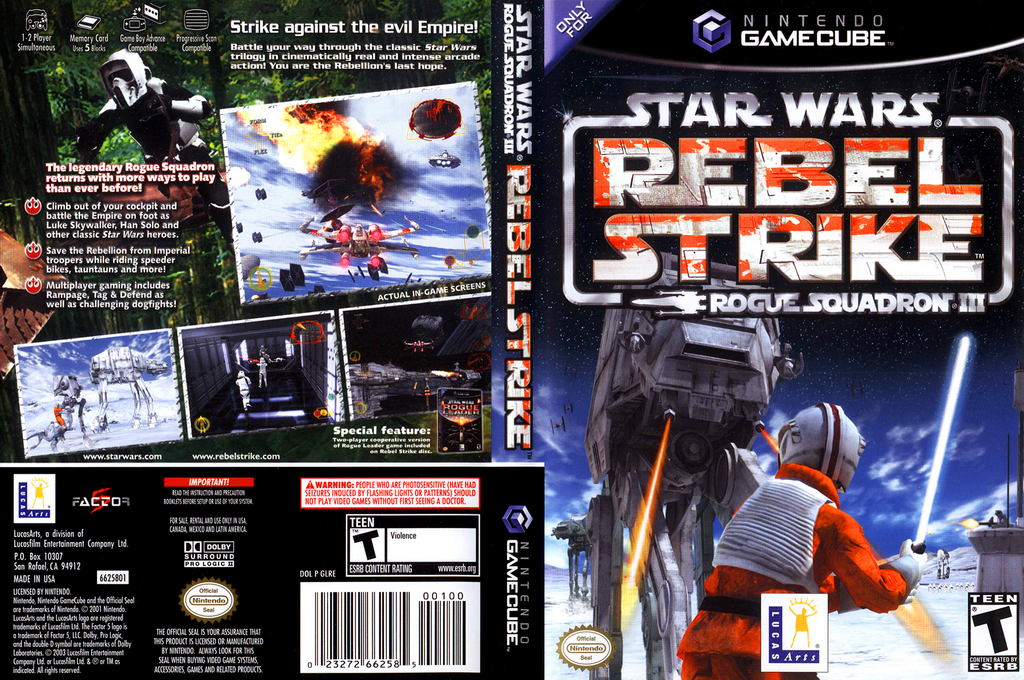 All right guys, this is a milestone game. It’s my final entry in the Star Wars series! There’s still one or two games I need to get someday, but now I have at least beaten all of the ones that I own. Rebel Strike is definitely a good one to ends things off with. It’s not the best Star Wars game by a longshot, but it’s definitely a quality title all the same. It’s a classic aerial shooter title with some ground elements thrown in as well. While those parts feel more button spammy than the rest it does help make the game feel more complete.

The game’s plot roughly covers the trilogy as per usual. It seems to start with the second movie rather than the first though, I’m guessing Rogue Squadron II probably covered that one. The Rebels are losing ground against the Empire so their only chance is for a young jedi named Luke and another aerial fighter to take back their home and win the war. During the game you get to pick your path as you progress through the story. Depending on which level you pick will determine which character you play as. It’s a pretty interesting way to go forward for sure.

There are around 10-12 levels in the game although if you pay through all of the routes then you can add a few more levels. (Only 2 routes and 4 levels are shared) Most of the levels have the normal aerial combat gameplay. It’s pretty fun as usual although definitely a lot less polished than the others ones I played which is almost odd. Good luck trying to lock on to anyone as the enemies move too quickly. There was a long tutorial level to start the game off so maybe I missed a few things, but it seems to be like there may not even be a traditional lock on. The enemies also camouflage into the space sky really quick. It’s hard to get a read on them so at times the best thing to do is to just blast wildly. You can also turn infra red on which helps but it doesn’t look quite as fun when used for long periods of time. That said, I’d give a thumbs up to the gameplay overall.

The next gameplay style in the game is the human combat. This is the best part of the whole game so it’s a shame that it only shows up 2-3 times. You basically play as Luke or Han and go around blasting people. It’s definitely a style where spamming the A button is enough to get you through, but it’s very satisfying. It’s extremely simple and feels like you’re back in the arcade. Just run around blasting everyone until you get to the end of the level. There’s nothing more that you need to get to the end and if you ask me that’s exactly how it should be.

Finally you have one level where you’re on a scooter. This is the worst level in the game so I’m glad it only popped up once. The goal is to ride to the end of the level and take out all of the scouts along the way. There are about 11 and then one that you can’t beat until the cutscene plays. The level is annoying for a bunch of reasons, but one of those is the fact that the level explicitly tells you to eliminate all of the enemies. It even gives you an attack to help with that. So what’s the scam? Well, if you attack them then they start attacking back and they’re a lot stronger than you. The best way to win this one is to actually not even try ramming into them. If you just fly peacefully to the end you can just turn right and left and the guys will fall into trees. It feels cheesy and I doubt it is really the intended option. This level just wasn’t made all that well.

The graphics here are pretty good. We actually get some scenes from the movie as well which is always pretty fun. The space levels are a little hard because of how everything is covered by the shadows. I don’t really think this was intended so I will say that this does hold the graphics back a bit though. As for the soundtrack, it’s all themes that you’ve already heard a few hundred times before. They’re still good, but there’s nothing really new to talk about here. Star Wars uses the old themes as a crutch so I look forward to hearing some new tunes once that EA game comes out in the near future.

There isn’t much replay value here, but it’s still a little better than some of the other games. You can go back and play the other paths to experience the full story. There are also some unlockables and you can try to earn a gold medal. Ultimately this may not be a whole lot so I would say to keep that in mind. The main campaign is only a few hours long as well so this is the kind of game that won’t really last very long. That means that the gameplay has to be tight and I thought it was. As long as you like aerial fighter games then you’ll be fine.

Overall, Star Wars Rebel Strike is definitely a good one to get. It’s to be expected though since it did come out for Gamecube. That console is still the ultimate gaming machine and I don’t expect that will ever change. It was really a pivotal moment in gaming history. Star Wars Rebel Strike may ultimately be lacking a little polish in some areas, but its core fundamentals are strong and that’s what counts. If you haven’t played this game yet then it’s worth buying, especially if you can find it for a good price. If it’s overpriced and out of print then I would just suggest getting a different Star Wars title. Most of them have a similar feel to this one so the price is key.