It’s time to look at a Sonic game that is generally known as one of the best of all time! I remember hearing all the reports of how good it was, but I was too busy experiencing the amazing Sonic Forces story that I couldn’t buy it. Well, the game is finally out physically on console so now this was the time to snag it. It is definitely a lot of fun. While I think Sonic Advance 2 is still the best of the 2D games, I would definitely say that this is the best of the home console 2D titles. The original classics just can’t top this one.

The basic plot is that Eggman is back and he plans on using the Gems to destroy the world. This also leads the gang into an alternate world where a bunch of robots are up to no good as well. Sonic decides to foil their plans and he enlists the help of Tails and Knuckles as his drivers from time to time in order to do this. The villains may have a bunch of tricks up their sleeves, but that won’t deter our hero! There aren’t really any big cutscenes so for the most part the game just shows you this visually through the levels and quick little moments after each zone. You can grasp what the plot is pretty easily.

There are 13 zones which each have 2 levels. The average level takes about 4-6 minutes so each zone is close to 10 minutes. Make sure that you travel through each level carefully because if you lose all of your lives in act 2 you will have to start from scratch at the beginning of the zone again. It’s not something that will likely happen all too often, but it can be brutal in the later levels where each zone takes a while to complete. Dying near the end will result in a lot of lost gameplay. Aside from the main Mania mode there is also an Encore Mode which is effectively the same thing, but now you get to use Mighty or Ray. Whoever you don’t choose at the beginning will get abducted.

The graphics are definitely on point with the modern retro designs looking pretty crisp. The levels are very easy to see and so you always know where you are going. I also enjoyed the soundtrack quite a lot as we got many really solid themes. The final levels had the best soundtracks out of them all as they were quite epic. At 3 and a half hours the story is also at a reasonable length considering the price. It’s almost as long as Sonic Forces so if you bought both games as intended then you have more of a normal sized game length.

As for the gameplay, it’s fairly good. In general I’ve never been a huge fan of 2D Sonic gameplay though. As I’ve mentioned in the past, it’s actually some of the weakest in the genre mainly because in Sonic games like this you never really get to use his speed. In fact you are actively penalized for it. That’s why Sonic has always worked best in 3D. Just try going full speed in Sonic Mania, all that will do is cost you a bunch of lives and all your coins. You’re encouraged to make your way through the levels at a reasonable pace as you look before you leap. Ironically as a result you typically have a faster pace of gameplay in Mario and Kirby than Sonic. I think adding more checkpoints and allowing you to restart from the second act after getting a game over would have definitely helped to make your loss not feel so bad each time.

The gameplay is definitely more streamlined than the retro part of Sonic Forces though. In that game you never wanted to jump because the physics were just off. In this game that is never an issue. At most it can just take a while to build traction so when you get hit sometimes you aren’t able to chase your coin down. That was probably an intentional choice to prevent it from being too easy. It did make the bosses more challenging even if the game had to resort to cheesy mechanics. I died against a boss in the glitchiest way possible in one level as I beat him, but because I was on the right side of the screen it counted as a loss. There’s also one part where you have to move across various elevators and it would always stop you just long enough to get squashed. As long as the character model was even close to the part being squished together you were finished.

As far as replay value goes the obvious option is grabbing all of the Chaos Emeralds. You find them through giant coins in the levels and then you have to catch the robot holding the Emerald. I managed to snatch 2 of them. The levels aren’t easy and there’s no quick way to get to them aside from replaying the whole level again so that will add a lot of time. You can also try beating the game with all 5 of the characters if you want. There are also the various PS4 trophies to be snagged. All in all, there’s a lot of content here.

Overall, Sonic Mania is definitely fun. Fans of the 2D Sonic genre are sure to enjoy it and it’s definitely a big homage to the classic games. I’d probably say that it’s the best classic Sonic game. (Not counting spinoffs like Sonic Fighters) It was definitely nice to see some of the classic characters like Metal Sonic get their moments to shine. The cameos for Fang and Bark through the illusions were also pretty solid. I’m definitely ready for the next big plot based Sonic game to come up soon but in the meanwhile it’ll be good to have the retro Sonic games continue as well. Hopefully the next one adds a bit more of a plot though and the perfect way to kick things off would be to have Fang return in person. As a bounty hunter there are a lot of ways that they can set him up as the antagonist. 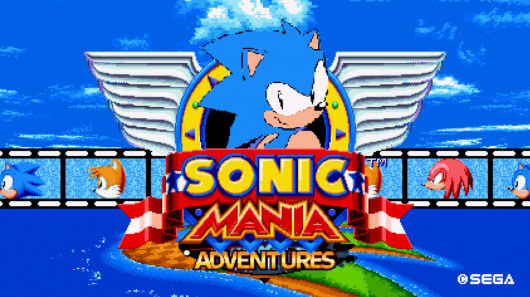 It’s time to look at the little promo series Sega came out with to promote the complete Sonic Mania collection. It’s always nice to see a company put out a little extra effort to bring something like this to the table. It’s just a cool thing to do and I’m always up for some new animations. When you combine the 5 parts the series is around 11 minutes. In that time we get to see the main cast of Sonic Mania mix it up a bit. It’s a solid promo that I would recommend to anyone.

The basic premise is that Sonic and Tails are having fun on the island when they notice that Eggman is up to his old tricks once again. They decide to put a stop to him while grabbing the Chaos Emeralds along the way. Meanwhile Knuckles, Mighty, and Ray are also having some trouble with Eggman. The group all head towards Eggman’s location from various directions. Eggman was prepared for this though and sends out Metal Sonic. Can the heroes defeat a being who is as fast as Sonic and is powered by the Chaos Emeralds?

Right away you’ll have to give the series a lot of credit for its nostalgic art direction. The characters all really look like their counterparts from the original games. The animation is like something out of the original Sonic cartoon but possibly even more retro. It’s all very smooth and once again you’ll wonder why we get this level of animation for a web series while the cartoons on TV don’t even look as good. It’s a very different style from many of the other Sonic cartoons, but it holds its own against all of them. Sonic X certainly still looks the best, but this one would give Sonic Boom a run for its money in the graphics department.

Then you’ve also got the classic music which is a lot of fun as well. It makes all of this feel like a 2D Sonic adventure. Considering that this was before any of the characters could talk either, the series has to be very expressive with them. You can always tell what the characters are thinking and doing so that’s another bit of credit we have to give the animation team. Sometimes a character can just be annoying when they can’t talk as poor writers can’t use them well, but this show had no problems there.

Sonic is a solid character as always and I was glad to see him head right for Metal Sonic and enter battle. He’s as fearless as always and Sonic also puts up a great fight considering that he was holding his own against Metal Sonic while in base form. Tails is nice as well although he doesn’t really get to do much. It’s still always good to have a sidekick. Mighty gets a considerable amount of hype here as he completely destroys Metal Sonic in a fight. Who knew that this guy was so high tier? Ray doesn’t do nearly as well, but then again he never was too much of a fighter so I suppose it was to be expected to an extent. Then we have Knuckles who got less of a role than the others, but did come through in the end when it counted.

I can’t say that Metal Sonic’s appearance was too positive though since he was treated as a big punching bag the whole time. It’s unfortunate because he should be way stronger than these guys. This isn’t meant to be a very serious action show so it’s not like we were ever going to get really long fights, but Metal Sonic still could have looked more powerful with the amount of screen time that he was given. His fight also had some stills when I would have preferred to see him speed blitzing, but we got scenes of both varieties for him so it’s not really a problem. Eggman was also consistent as always which is good.

Overall, This special was a lot of fun to watch. I’d recommend it to anyone and at 11 minutes you have no good excuse not to watch it. It’s a fun adventure with a little action, you can’t go wrong there. Hopefully one day we will get another full length Sonic show since the possibilities are always endless for it. If TMNT can get so many different shows within such a small time frame, Sonic should also get the same treatment. He has proven that action as well as comedy works within his universe so no matter which direction they take the franchise in, we should be set for a golden experience. Yes, I don’t have Sonic Mania at the moment, but I’m sure its time will come. As a Sonic fan I’d expect nothing less.