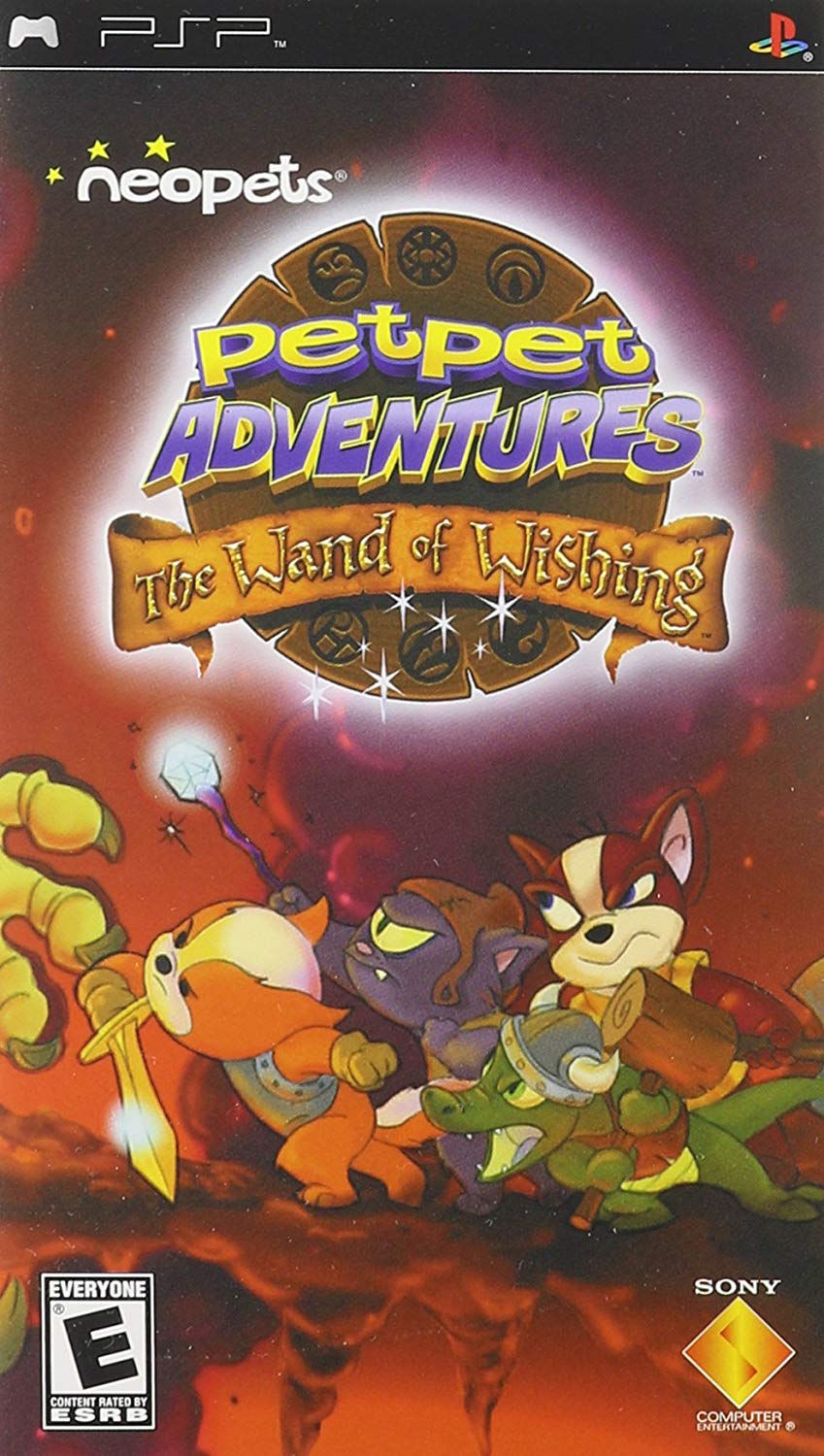 It’s time to look at a Neopets game that I’ve had on the back burner for quite a while. It’s been pretty fun diving into these old games and I’m steadily closing out all of the PSP titles I own. This one definitely has its share of issues, but is ultimately a pretty decent game. It does get that RPG feeling across.

The game stars with a girl and her dog being cornered by a group of goblins. They want the legendary Wand of Wishing and unfortunately the heroine grabs it from the secret location and then lets it get taken into a portal. Her dog heads inside to grab it. The mission will be difficult though as the wand is now in a fantasy land filled with dragons and fairies as multiple factions wrestle for control. This pup is going to have to play hard ball.

I do like that the opening and ending cutscenes both have actual voice acting. I feel like the whole game should have had that instead of gibberish being used as the monster language though. The main heroine definitely isn’t ready for this action adventure though as she actually has a wand that can grant any wish and still lets the villains get the upper hand. There are hundreds of wishes she could have quickly made to make the villains stand down. That would have been a good way to play things. I would have actually been curious to see more of the human world since goblins apparently exist here. Is the world under siege and a sequel would look at that or is she simply in the wrong neighborhood? So many questions and so little time.

As for the actual gameplay, this is an overhead open world RPG action title. You walk from area to area fulfilling various quests and saving the king/queen of each realm. Your weapon can be a close quarters one like a sword or you can use a crossbow. I highly recommend the latter as their range is far greater and their power is better. Whoever designed this game must have had a very high opinion of this weapon because to have one that has better range and power is pretty unheard of. You will definitely want to have a high level of power because a lot of the bosses have Cheese abilities that will destroy you very quickly otherwise. One can freeze you as he lands multiple hits and others fire so fast that you can barely see the attack.

I spent around an hour just trying to cross one room at one point because even the minions were taking me down in a single hit. Just equipping weapon and armor simply isn’t enough. You will quickly be taken down. Your only hope is to go to the gym and level up your core strength, speed, and other stats. Make no mistake, these skills are what’s really going to get you through the door. Using the gym costs a lot of money and you only get an upgrade once you beat the boss but it’s worth it. Soon the minions who were beating you in one hit will barely be able to hurt you. At that point you will have a much better chance at winning.

You can also wield magic but I never quite got the hang of that one. My magical abilities weren’t quite high enough to use most of them so I bought a healing spell and left it at that. I highly recommend the health regeneration spell by the way as you can keep it activated almost 24/7 and it doubles your health recovery speed. It’s incredibly handy in all situations.

One issue about all of this is the money. As I mentioned it is all quite expensive and the problem is that the resources are finite. Once you clear a world you cannot go back and enemies surprisingly do not respawn. This means that if you go too fast you may end up burying yourself in an unwinnable situation. Fortunately that didn’t happen to me but if you like speed-running a game just keep this in mind. You don’t want to skip too many enemies. Honestly they should have just left the worlds open. It also means that you can’t clear the side quests either which is no good.

In general the game suffers from menus that aren’t very intuitive and long loading screens. Going into any area triggers a long loading screen and the menus are slow. You have to scroll screen by screen to get anywhere instead of a quick click. It can be tough to figure out most of the game’s more advanced features on your own as well.

As far as the graphics are concerned, I’d give the game a thumbs up. It is certainly one of the weaker PSP games in that area without a doubt but it is good enough. You can always tell what is happening and at worst the game just can’t load up much beyond what you see so you’ll notice that your attacks don’t do any damage if they hide just out of view. The soundtrack is decent but has no noteworthy tunes. You’ll likely forget all about them by the time you have wrapped things up here.

The story was fun enough as I mentioned but there is one moment that doesn’t make much sense. There is a twist about who one of the villains is and it is ambitious since it is a character that we will need to stop the end of the world. She’s evil but when another villain shows up this quickly goes 180 as she asks for our help. So much for pride among villains. At the end she makes a half hearted attempt to get in our way again but you don’t feel as though it is a serious attempt. Hopefully the other guardians will give her a stern talking to after her antics.

Overall, The Wand of Wishing is a pretty good game. It may not have the depth or length of a standard RPG, but you can still tell that some effort was put behind this one. There are several areas where it could have improved for sure like the loading times I mentioned earlier. Clearer instructions would be good as well but once you figure everything out then you are sure to have fun. Just be sure to go to the gym and buy the best armor/long ranged weapon and you shall be fine.