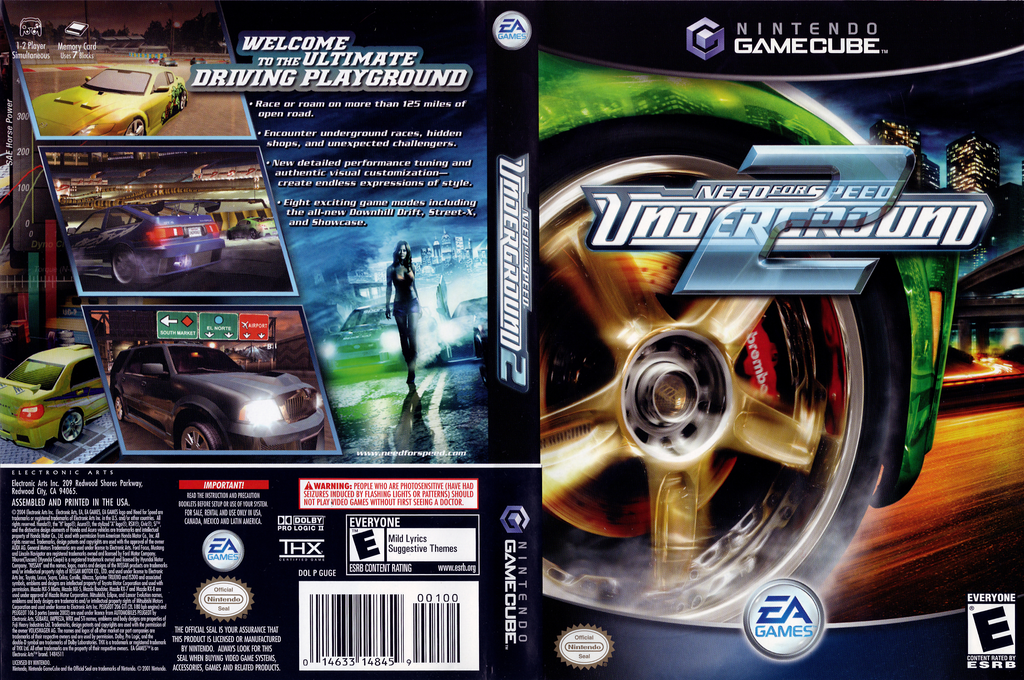 It’s time to look at a Need For Speed game that I’ve been working on buying for many years. I beat the first Underground a while back, but I just hadn’t gotten around to buying this one. Well, recently I bought around 6-7 games in the series so now I can go on a little roll. This game was incredibly long so clearing the story was a daunting task, but one that I was prepared for. It’s definitely a great racing game with content that will last you a long time.

The story starts out with a bang as your character is ambushed by someone and your car as well as all of your money is stolen. People don’t remember you without the car so now you’ll have to start from scratch. Fortunately, a rich lady appears and agrees to help you out in exchange for conquering the Underground circuit. You decide to do so with one motive at hand, you want to crush Caleb, the guy who stole your stuff. Can you make it to the top or will he sabotage you before then?

I do like how the game continues from the first with this intro. It’s even a good in universe reason to explain why you’re back at the bottom even if people forgetting your name is a bit of a stretch. Still, the actual premise beats the execution. There aren’t a whole lot of cutscenes in this game and it’s not like the main character ever even appears. The cutscenes are done in comic book format and use moving stills rather than animation. So, the games have some room for improvement in the story, but at least this one did have a real story. I’ll give the title some credit there.

The gameplay is certainly on point. It brings you back to the simpler days of racing as you just drive to the goal using your skills. Eventually you are given the option to add a booster, but that’s as far out as it’ll go. As I’ve mentioned in the past, having a booster isn’t bad. It’s still pure racing and there’s a reason why Need for Speed is so well known. The franchise is just really good at doing what it does best, getting you into the zone. You’ll be dominating the rest of the cars by the end of the game as you master the controls and keep on improving your car.

You better make sure your car is on point because there are over 200 races in the game and if you have to replay all of them a few times to win…then you’re going to be here for a long while. You can clear the game after around 150 races at least, but that’s still a lot. The game is around 20 hours long and 100% completing it will take significantly longer than that. To help ease the repetition you can also go to shops and spruce up your ride a bit. Switching up how it looks should help quite a bit in the long run since it’ll feel like you’re racing an entirely different vehicle.

One thing to watch out for is the game’s visual reputation gimmick. There are 5 stages in the game and to get to the next one you always have to increase your car’s star value. The max is 10 and you typically need to increase it by 2 for every stage. So if you have run out of levels on a stage that is probably why you haven’t been able to go forward yet. Speaking of which, there are several kinds of races. First are the standard Circuit ones. Just drive to the goal to win. Then you have the best ones which are Drift. Just keep on turning to wrack up points and you’ll usually win the races by a rather huge margin to be honest. Street X races are sort of like mini races. You have to out drive the other cars on a very narrow track. Drag races are the toughest ones as you have to manually switch gears at the perfect time to win. The best thing to do is leave these til the end where you can cheese them with your booster.

The races that advance the plot are the URL ones which are typically a series of 2-3 races. Once you beat them then you move on. I do think it’s a little annoying how the game makes the races so long by the end though. Some races can go on for 6-10 minutes straight so when you lose them you’ve just lost a lot of time. I think a good race should always be 3-4 minutes tops. If you get beyond that then the race is too long. It’s almost a case of having too much content, but it’s under the same logic of how save points should be frequent and easy to access.

The graphics definitely look very solid here. It was definitely an interesting move to have the whole game take place at night. Honestly by the end I was hoping for some daylight levels, but the screens still look good. The cars are quite sharp and I always like the boost effect. It’s safe to say that these areas hold up. Unfortunately the soundtrack does not. I ended up having to turn off most of the music themes in the game and the ones that I left on aren’t exactly great. It’s a very weak soundtrack which isn’t all that surprising as EA in general tends to overdo it with their selection. Still, you don’t hear the tunes quite as much when you’re playing Madden and in general I think that series was better at it.

Overall, Need For Speed Underground 2 is a great racing game. You really can’t ask for much more out of the genre. It’s got a story and over 200 races. There is also a multiplayer mode to have fun with. I see this as being the definitive Need For Speed title, but we’ll see if it can hold on to that. Next up is Most Wanted which seems to have a better story and it finally brings in the pursuit mechanics, but it may come at the expense of a multiplayer mode. Either way I’ll start on that one soon, but with Kingdom Hearts III coming out it may take a little longer to complete than I would have expected otherwise. If you haven’t played this game yet then you should change that. It’s definitely a title that you will want up your sleeve.