Suggested by Destroyer This is a fairly close battle between fighters with very different movesets and personalities but they have a similar name. Beast Boy is certainly more versatile with how he can keep changing shapes but ultimately I would have to go with Beast here. He has mutated further in the past which really improved his strength and speed. I think when you factor all of that into the equation you will see that Beast Boy just doesn’t stand a chance here, he just won’t be able to keep up for long. Beast wins. 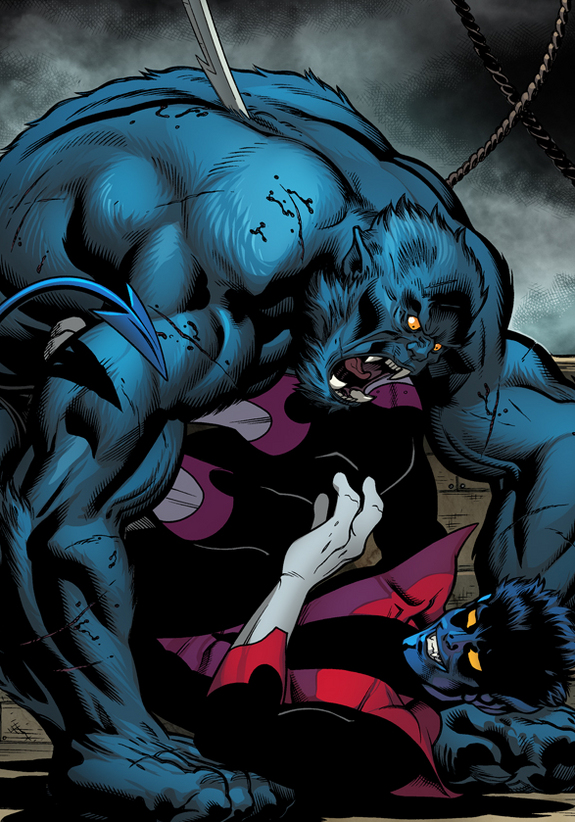 Suggested by Sonic This is kind of tricky but I don’t see the Beast being able to come out on top. He does have Nightcrawler beat in physical areas like speed and strength, but teleportation is super hard to overcome. Nightcrawler is also very agile and fast in his own right so mix that in with his swordsmanship and I dare say that Beast is really going to be in a world of trouble here. There won’t be much he can do. Nightcrawler wins.

It’s time for the final round of the tournament. Who can possibly claim victory! Leader and Beast both have super strength that they have attained over the years, but the Leader is superior. He got the Hulk’s power and throughout all of his mutations, the Beast has never grown quite that strong. He is simply outmatched. Leader also has a lot of good inventions to back him up as well. There you have it, the first blog tournament is now over. The Leader has claimed victory and has risen up quite a few ranks on the blog. It is certainly a pretty historic moment for him. Stay tuned for an announcement of the next tournament at some point! Leader wins.

Here’s a link to the first ever tournament bracket.

Tuxedo Mask is pretty strong for a human. His rose can cut through energy blasts and he has been shown to move at high speeds on occasion. It’s not all that consistent though and typically he does not look impressive by any stretch of the imagination. On the other hand, Beast has a decent amount of super strength and speed on his side as well. This round could really go either way which is fitting since a match this far into the blog tournament should be a close one. At the moment, I’d lean towards Beast here, but a re watch of the TV show could change that someday. Beast wins.

Day 1 of round 1 of the tournament ends here. Norman Bates knows how to attack people who can’t fight back once they have let their guard down, but that doesn’t mean that he can defeat the Beast. Beast is stronger than the average human as well as quicker. I don’t really see him going down so easily here. Norman would need quite the arsenal to stop the Beast since even a gun wouldn’t help him much. Norman just wouldn’t be able to get the shot off in time. Beast wins.

The Beast is very athletic and quick, but it won’t be enough in this round. Thor is much faster than Beast and if he gets one shot in it’s all over. Thor will get that shot in pretty early. Whether it’s lightning, A quick Mjolnir throw, or a punch, Thor’s speed would make sure that there is no escape for the Beast. Thor wins.

Mr Fantastic is back and he’s up against the Beast! The Beast is pretty powerful and athletic, but it won’t be enough in this round. Mr Fantastic has the powers of the entire Fantastic Four! With them at his disposal he can take down many fighters. Beast drops down the ranks with this loss. Mr Fantastic wins.

Beast is back, but he’s fighting Zangeif, who also has the power of Mecha Zangief! In that form Zangief gains projectile based attacks. Well only one, but that’s what counts. The Beast is very fast and strong, but Zangief is very durable and can take anything that’s thrown at him. Zangief is a true warrior. Zangief wins.

This is a pretty close fight. In pure power Beast has the advantage, but Blanka’s electricity helps his cause a lot. He’s just super strong and I say he wins this match for now. Of course, if Beast should ever get better at energy attacks he could come back and win this one. Blanka rises to 1-0 in the blog! Blanka wins.