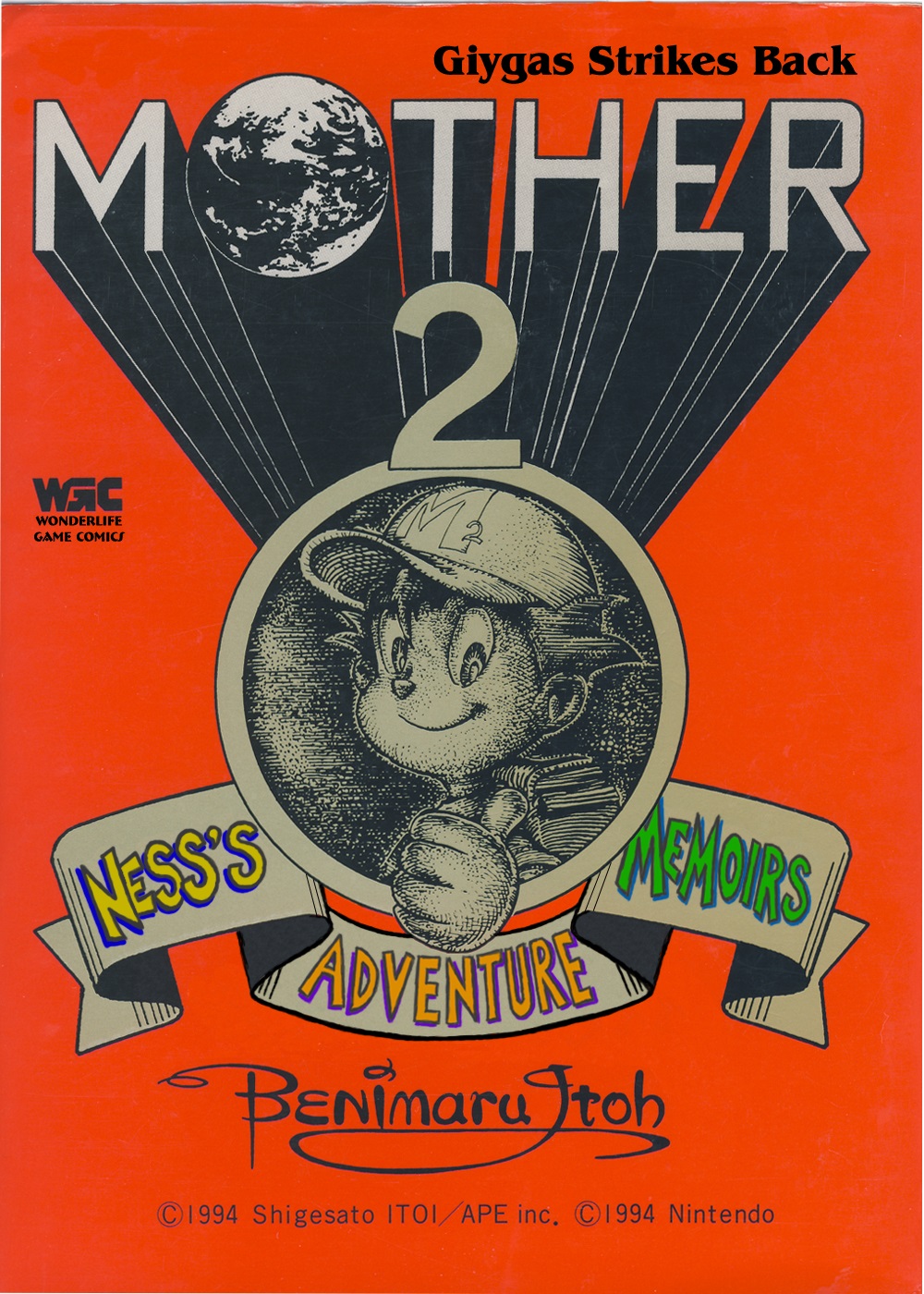 It’s time to look at an Earthbound manga from a while back. Of course this one didn’t come to America so it’s under the original name of Mother. The games always looked pretty fun and based on the story here I can definitely see why that’s the case. It’s a very surreal adventure that ultimately doesn’t give you all of the answers. A lot of the quest remains a mystery even by the end and that’s all right with me. It definitely allows for a sequel pretty nicely but can also wraps up well like this.

The adventure starts with Ness and his dog enjoying a normal day when Porky shows up. Porky’s friend has fallen in a ditch so he needs Ness to help. Ness is reluctant since Porky isn’t exactly known as a nice guy but Ness’ Mom tells him to go and help. Ness frees the friend but falls in during the process which of course leads Porky to run off and ditch the hero. Aliens possess Ness’ dog and tell the kid upon waking up that he must save the world and stop Giygas. Ness is ready to do so, but doesn’t have any powers so he wonders if he can really pull this off.

This manga definitely feels quite retro with how the art looks like something out of a Sunday newspaper comic. It’s pretty nice to see and you should be blasting through all of the pages with ease. It’s hard to place the faces at times but you’ll definitely recall them from various characters if you used to read a lot of comics back in the day. I definitely like the art style. It works well for what this story is going for as it gives you that Tintin adventure feel. The characters are all drawn well so you know them from the video games and the action scenes are handled well too. This all helps for adapting the stranger scenes in the series as well.

The cast may be on the small side but there are lots of supporting characters running around. Ness definitely makes for a pretty solid main character and it’s cool to see his trusty bat. He uses it to great effect when the villains show up. He’s definitely the leader of the team. He has that subplot about feeling like he isn’t strong enough to be on the team but gradually gets past that and even learns PK abilities of his own. He is definitely the best member of the heroes and a solid all around character. It’s part of why I want a new cinematic Super Smash Bros story someday. There’s a whole lot you could do with all of the characters actually talking and getting to use their experience from the main games.

Jeff isn’t really my kind of character but he’s a decent supporting one. He is just a little too timid the whole time. He does help out for fights though and even gets his own chapters so in a way he is the only other character who becomes a main character at one point. Then you have Paula who seems to have the highest amount of raw power. Of course the issue with PK abilities is that they completely drain you which leaves you vulnerable to attack from all sides. It’s a big drawback but considering how useful the PK abilities are it’s still useful to have them in the end. Otherwise the monsters would just be too overwhelming.

Ness’ Dad gets a lot of hype here. As I mentioned, he just seems to know things. It’s one of those eery elements of the series but for once it’s actually a good thing for the heroes. There’s no time to question how he knows these things and the knowledge does help the heroes out quite a bit as the series goes on. Without these tidbits they would really be in some serious trouble. Then you’ve got the federal agents who are on the case but don’t seem to know about the alien factor. It’s interesting though because the aliens are even public knowledge through books at the library. Maybe it’s one of those things were some people believe them and some do not.

As I said, this series has a lot of mysteries and is intentionally vague. It’s part of the charm. At the same time, there’s not a whole lot more to say about the series. It’s over very quick and is only around a volume long. There are a lot of mini adventures the heroes have on their way to the goal and they’re all pretty solid. The monster that forces you to puke just by being near it is certainly unique although I wouldn’t say that enemy landed in quite the same way as the other big obstacles the heroes had to face off against. One of the better obstacles was probably when the heroes had to break into a corrupt church and fight it out. It was one of the first big enemy forces that Ness had to deal with. There was also an interesting inn that felt like something out of the Twilight Zone. When you enter there’s no guarantee that you can leave. It’s all linked and takes you to different dimensions and things like that. Definitely not something you want to mess with.

Overall, At this rate Earthbound will never get a true remake over here but it would definitely be cool if it did. This would also be a fun volume to bring to America. It’s a complete story from beginning to ending that you can understand whether you’re a fan of the series or a newcomer. I haven’t read a manga with this kind of art style before either so that was nice and unique. Personally I thought it fit rather well with what the story was trying to tell. I’d say this is the definition of a solid manga. It hits all the right notes and while it may end very quickly, you still feel like you got to have a good amount of adventures.