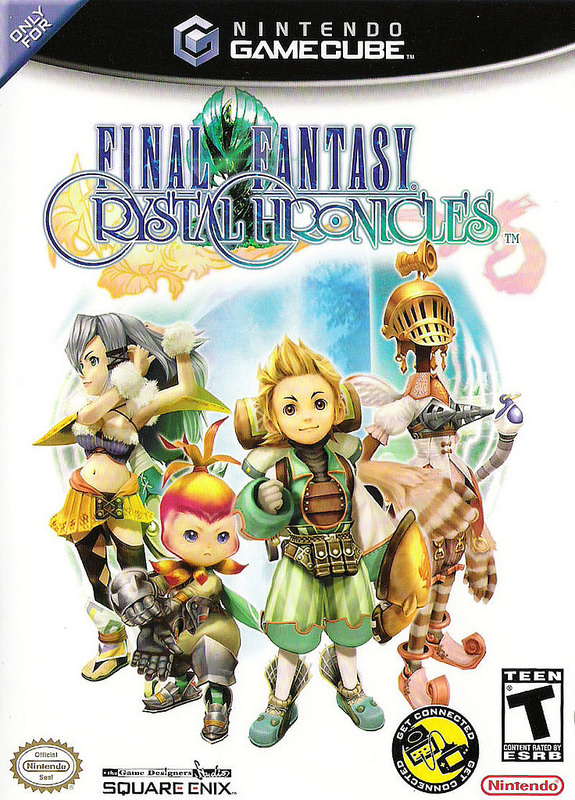 It’s time to take a look at the Crystal Chronicles. Final Fantasy has had a lot of different game lines over the years and they all seem to perform fairly well. You’ve got Tactics, Chocobo, Crystal Chronicles, The Rhythym music games, and the main line. By completing this game I have finally been introduced to another segment of the series but it certainly pales in comparison to the classic style.

There isn’t much of a plot in this game but I’ll give you the general premise. You start out by picking what kind of job you want to have and in turn what kind of creature you are. After that you travel with a little circus troupe as you purify the world of Miasma. To do this you must go to each area and take a drop from the Legendary tree. You get to the tree automatically by clearing the level and beating the boss. Eventually you will be able to reach the final stage where you must successfully defeat numerous phases of a final boss until you save the world. There are a bunch of subplots and lore that you will run across over the course of the game as you meet with new people. It’s luck based on when you encounter them so just keep running back and forth in the overworld until this happens. One such plot is a black knight who is going around beating people up. From what I could gather, the big boss known as Raem has been eating his memories which is making him go crazy. There’s also a mysterious little fellow who is always lying and stealing whenever he is around. Most of this is filler as you can guess. You never even get to fight the Black Knight even though he is mentioned and hyped up quite a lot.

The gameplay is that of a 3D action title. You hit opponents with your sword/staff or fire off some magic bolts at them in real time. This also means that you can dodge their counter attacks. By all accounts this should be a real good decision on the game’s part since who doesn’t like fighting in real time? Well, it is good but not all that great. Your hits never feel like they have a lot of weight behind them. It’s a more limited version of the .Hack style. Still, it works well enough in the game and nothing is more satisfying than walking into a room with a bunch of enemies and still managing to pick them all off. Divide and Conquer is crucial here.

I think what really hurts this game at times is how much the multiplayer aspect of the game is stressed. You’re meant to play this with a few others as everyone takes a different occupation and you go through the world. You can do this on your own but then it’s like playing the game 4 times over. You also better make sure your allies are as strong as you since the game stacks the difficulty up accordingly for each player. I played solo and can assure you that it took a lot of grinding to get through the final boss. I had to bear virtually every level twice and a few levels for a 3rd time before I finally got strong enough win. Part of the reason why it takes so long is because it doesn’t go by a traditional level up system like most Final Fantasy titles. Instead you obtain artifacts at the end of each level and you choose which one to keep. This will give you a +1,+3 for one specific stat. There are 3 stats in the game, Attack, Defense, and Magic. Alternately sometimes you can choose to get another heart or another command slot which is essentially a quick select for spells and Phoenix Downs. I highly recommend the latter 2 so unless it’s vs a +5 or something then it’s the best bet. You can’t get any artifact twice so only replay each level a few times. Eventually there will be no artifacts left so you’ll be wasting your time. You only get a new memory from each area once every 3 years so you could replay it for equipment, but it’s usually best to do both in one shot so switch up the areas as best you can.

Also, the equipment is very important here aside from the artifacts so try to get yourself a master class weapon and at least a Mythril level Defense & Belt. That’s like getting multiple upgrades so it will save you a lot of time. Getting to the final boss only took around 10 hours, but it took around 5 more hours to get to a level where I could beat him. As it so happens with many RPG games like this one, by the time I grinded high enough to beat him it seems like I went overboard so I didn’t even have to use any of my Phoenix Downs. I ended with about 20 extra, but it’s always better to be safe than sorry right? The bosses can be tricky so you just want to figure out what the best approach is. The game isn’t very straight forward so sometimes it will be handy to look online to see what you need to do. For example you need to use Cure on the memories in the final level to unlock your super attacks and the minions only respawn in the second last phase if you beat both so just take down one of them. Be warned in the final phase that you can accidentally heal the boss with your cures so definitely try to avoid that.

I dare say that the game’s biggest weakness here is the plot. You can make a case for the terrible level up system as well of course, but you really expect a dynamic plot from Final Fantasy. Sure, we get little cutscenes before each level as a narrator talks about how great the places used to be, but it’s just all very dull and boring. The actual characters have no personality and everyone is just going through the motions. There is never a sense of danger at all and the game simply isn’t cinematic, but at the same time it isn’t colorful like a Nintendo game either. It’s like playing a game full of exposition with nothing ever coming out of it. If you look really hard at the mini cutscenes and optional side quests then sure you’ll probably understand the lore, but there’s still nothing epic about it. I want a real plot, whether it be a slice of life one like in Sword Art Online or an end of the world adventure like Sonic The Hedgehog 2006. At least give me something.

There is a good amount of content here so I can’t really critique the game on that aspect. You can keep playing this game for a very long time if you want to get all of the artifacts. Especially since you won’t know what the level’s mission is until you beat it and that affects which artifacts you get. If you want to see the mission then you need to get your GBA ready and connect to the game. Again, they put too much of an emphasis on this connection part if you ask me. If the game had decided to be a little more self contained then I really think that it would have ended up being a whole lot better. Instead it just limits itself. I can’t see myself going back to the game for any of this, but if you really enjoyed the experience then go for it.

The graphics aren’t very good, but it’s mainly because of the artistic direction that the game went in than with the actual effort. The character designs are on the chibi design and none of the creatures look particularly threatening aside from the final boss. At least that guy seems pretty intense and it’s a monster design that is memorable. Unfortunately the soundtrack isn’t particularly good either. I can’t think of a single good theme in the game and that’s really a bad sign. Final Fantasy is known for its stellar soundtracks so I was actually rather surprised that this one didn’t hold up so well.

Overall, Final Fantasy Crystal Chronicles really wasn’t for me. The gameplay isn’t bad, but I did have an issue with the level up system and the sheer amount of grinding to beat the game. I’m not usually opposed to grinding, but when your upgrades depend on luck and the game doesn’t tell you much then it can be rather annoying. It becomes a bit of a chore to play the game once you enter the end game as even the old levels get buffed to the point where the enemies are stronger than the ones in the final dungeon. Throw in the fact that the plot was so weak and there isn’t much reason to play this RPG. If you want a good action game then check out Legend of Zelda. If you want a big plot experience then play a main Final Fantasy title. There’s just no room for the Crystal Chronicles and I’m hoping that the Wii game is a little more fun.