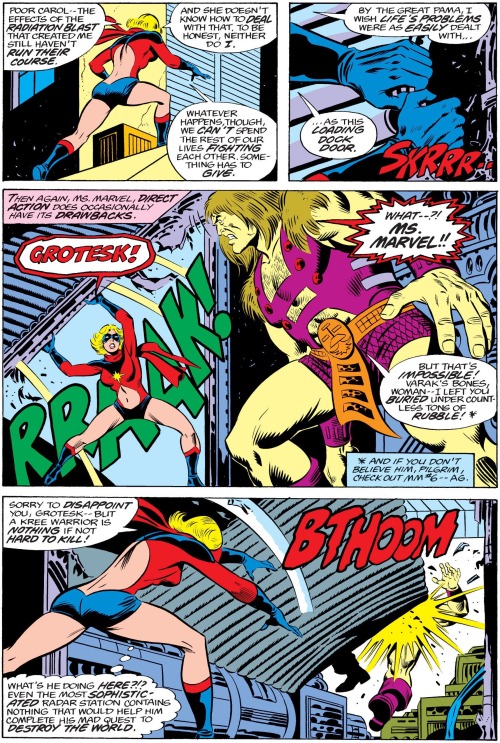 This is a tribute to the recent Captain Marvel film. Ms Marvel definitely looked really good there as she got to show off her super speed and strength. She’s certainly one of the most powerful Avengers out there and would easily be able to take Grotesk down. He’s a fairly obscure villain, but certainly one who is still worth remembering. The guy’s a tough fighter so maybe he could take one punch before he goes down. Either way it’s still a one sided battle. Ms Marvel wins.

Accelerator is the strongest Esper in Index. He can manipulate vectors in a way that works like Graviton’s barriers. You can’t hope to stop him with direct attacks since they will just be bounced back. The best way to stop him is a bunch of sneak attacks or to just overwhelm the guy. After all, a single good hit will take him out if you get past that since he’s no more durable than your average teenager but that’s a lot harder than it sounds. Ms. Marvel does have a lot of power up her sleeve but I think she won’t quite have the speed to pull this off. Accelerator wins.

Ratchet is a genius mechanic and he has had quite a few game changing weapons in the past, but none of them are quite good enough to take Ms. M down for the count. To an extent she can block all of his energy attacks and Ratchet doesn’t have any guns fast enough to tag her. This is simply a mismatch where brains don’t take the win against brawn. It’ s just how it goes sometimes. Ms. Marvel wins.

All right, it is time to bring back the Big 2 as far as comics are concerned. Marvel’s given us a glimpse of what the new Avengers roster will look like and how they perform as a team. Comically given the term, the PC (Politically Correct) Avengers online, it would be interesting to see how good the comic was. I think it is safe to say that it was a little more fun than I had anticipated.

The Avengers head off to stop the Radioactive Man. While half of the team deals with a giant lizard that has appeared, the kids head inside the warehouse to fight the main threat. The comic seems like it will be good light hearted fun even if we do already have some casualties. The bodies are off screen, which helps for that, but I guess we’ll see if the series decides to go Uncanny Avengers level of serious on us soon or if they go for a cheery atmosphere. It’s been a while since we got the former with the Avengers so that would be fun to see.

As for the members, well, I doubt that anyone is going to prefer these guys to the originals. Falcon is not quite the same Captain America that Steve Rogers was. He overreacts quite a bit and he’s insecure about his position. Iron Man…well, we know that it’s not Stark even if he hasn’t said anything yet. The theory that it is Pepper seems to be right on. She is more experienced than the others and that’s good since the team needs someone who knows their stuff. Nova, Ms Marvel, and Spider Man are the rookies so they will grow up during the series. Right now, Nova would be my favorite from the three as he jumps into danger. He’ll likely be heavily nerfed throughout the series since he outranks the other heroes so badly. The new Thor doesn’t get many lines, but she will certainly stay as the team’s power hitter. I look forward to seeing who her alter ego is once that twist finally comes out.

While a lot of the members are new, I wouldn’t actually call them weak. It’s a little surprising, but when you really think about it, these guys have what it takes to still be Avengers level. Thor and Iron Man give the team a good amount of raw power while Nova and Spider Man help out on the speed angle. The other help give the team the sheer numbers advantage and it all adds up to a fighting force to be feared. We shouldn’t underestimate the new generation!

The art is nice and streamlined, which makes for some nice fight scenes. It’s splendid and I’m glad that Marvel has once again done a good job on the areas that count. Writing and artwork. This series has the potential to be one of the better Avenger titles even if most of the members are rookies. I forgot which comic had a hero saying this, but it sure has become easier to join the Avengers nowadays. I guess it is just something that happens with time.

Overall, Avengers succeeds in what it sets out to do. It gets you engaged in what’s happening and eager to read the full comic. We jump to the action scenes right away and the pacing seems like it will be nice and quick. While I wouldn’t want this as the main Avengers title, it seems like it’ll be a good team book to check out from Marvel. If the X-Men could have around 6-7 series back in the day, the Avengers should be able to juggle a few as well. We will see if Falcon ends up getting used to the leader role or if he is eventually forced to relinquish the title. While this issue is more exciting than Secret Wars, I preferred the latter as it still looks like it will be a blast to read. I’m highly looking forward to that big event.

Doomsday Man is definitely a powerful opponent, but he won’t be able to defeat Ms Marvel. Ms Marvel has some pretty intense speed and her raw power is also high tier. I don’t think that Doomsday Man would last long against her might and she would dodge all of his attacks with ease. He’s just not fast enough! Ms Marvel wins.

Never underestimate the Griffin! He can be a real power hitter when he wants to be and he’s taken on the Avengers in the past! I’d still take Ms Marvel to take him down in a fair fight though. She’s got the speed advantage and her energy blasts will help her take the win. Ms Marvel wins.

Ms Marvel has super strength/speed. The Wasp has some energy attacks of her own, but Ms Marvel’s are superior. She could win this round with a single punch. Wasp’s ranking takes a hit with this loss, but it had to happen at some point. Maybe Wasp will return one day. Ms Marvel wins.

Ms Marvel is back for another win. Mystique’s shapeshifting powers can definitely come in handy during a fight, but against Ms Marvel it’ll make little difference. Ms Marvel has super strength and flight. The basic keys to success in battles. With them it’s harder to lose than normal. Ms Marvel wins.

Ms Marvel is back, but Tigra’s in for a big loss. She could never keep up with the kind of powers that Ms Marvel has. Tigra has just never been in quite the same league. She may be athletic, but she lacks the power needed to win. Ms Marvel could down her in a couple of blows. Ms Marvel wins.

Ms Marvel is back, she managed to avoid getting a loss for a while, but Bass is finally here. Her skills may be in the highest possible level for Marvel, but she still can’t beat Bass. Bass is the strongest being in all of media and can take pretty much any character down in a single blow. Bass wins.