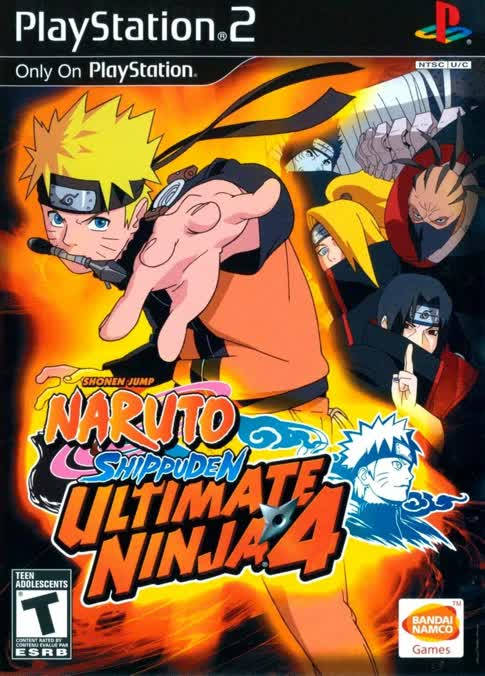 It feels like such a long time since I’ve played one of the Naruto Ultimate Ninja games. It’s a pretty nostalgic series for me because I remember playing Ultimate Ninja Heroes nonstop on the PSP back in the day and also sank a ton of hours into Ultimate Ninja 2. The games just had an excellent amount of replay value with tight gameplay to boot. It was almost sad to see how far my skills have deteriorated from those days. In time I could get them back, but it would take a while. Ultimate Ninja 4 is a fun sequel. I wouldn’t say it is strictly better than 2 because some aspects as a bit weaker, but it’s still a great game all the same.

The main story mode is called Master Mode this time around. Basically there are two chapters in the game. The first is an original story about Naruto helping a girl avoid her path to self sacrifice. You have to fight a giant monster and it’s pretty fun. I was surprised when it ended so fast though. Then the game adapts a little less than half of Arc 1 of Shippuden as you get to meet up with the fake Itachi. The main gimmick for this story mode is that unlike the main gameplay of the other modes, you fight in 3D here. It’s like a beta for the Ultimate Ninja Storm games. It’s pretty fun, but you’ll quickly realize that you’re just using the same combo a lot. It’s the only one worth using because it does so much damage. The game is fairly easy so you shouldn’t have any problem clearing it. It’s only around 3-4 hours long and probably a lot shorter if you really blast through it. I appreciated the experiment and it seems to be a popular thing to do as Tekken 6 also had a main story mode which was in 3D while the rest was in 2D.

There’s a backup story mode where you relive the original series. Most of it is told through flashbacks while you get a few fights. It’s not the most engaging way to re learn the story, but it does allow you to unlock new fighters so it’s worth going over. Aside from that you have the multiplayer mode and the shop where you can buy a lot of things. There is a ton to purchase and earning money takes a while at first so this definitely helps to add a bunch of replay value for a while. Either way, the multiplayer has you covered in that regard. One thing to always remember is that for fighting games, the story is the cherry on top, but not the cake. As long as the gameplay is really good, the rest will all fall into place.

The gameplay is different from many other 2D fighters. You can jump between the background and the foreground. You can launch opponents with up to 4 different directions per hit which results in numerous combos. Once you launch an opponent in the skty and gives chase, it becomes a matter of timing. You have to press the substitution button at just the right instant and it keeps on getting faster and faster. Hesitate too much and it’s over or press too quickly and you’ll meet the same fate. It’s pretty interesting and this is one game where it’ll get pretty advanced as you learn more and more.You’ll definitely be very engaged with the gameplay style right from the start and my favorite part of it is probably that every character has a homing attack. It’s always a lot of fun to use.

I don’t care for the new rock paper scissors gimmick they added though. Occasionally you’ll see this happen and the computer happened to win it virtually every time. You can’t really beat a computer in a “luck” game unless they allow it after all. As a result, the whole thing feels sadly futile at times, but you won’t lose much health even if you lose the round. I also don’t like the fact that they got rid of the triple final smash. In the older games you had 3 different levels of a final smash like in the Marvel vs Capcom games. Unless they just got rid of it for story levels, you are down to only one in this game and you either switch it in the main menu or you have to play a different version of the character to have another attack. Either way it is a bit of a downgrade.

Really, that’s why this game can be a bit of a downgrade from Ultimate Ninja 2 at times. The story definitely isn’t as good as 2’s which was a cool original plot and the new gameplay mechanics just don’t help. It’s still a very solid game as it kept most of what made the originals a lot of fun, but there probably isn’t much reason to play 4 when you can play 2. Unless you really like the Shippuden cast more than the regular one I suppose. It’s a shame that Ultimate Ninja 5 never came to America, I would have been curious to see how that one would have been.

The graphics look pretty good. They’re not amazing and the style doesn’t pop out as much as the Clash of Ninja series since they’re going for a more drawn look, but it works well. The final smashes are still flashy when they need to be and the game has held up well. The music selection is also pretty good. It reuses some themes from the older games, but I’m assuming that some of them are new as well. There is a pretty good amount of variety here so you don’t have to be worried about getting spammed by the same song too often. As far as difficulty goes, Ultimate Ninja 4 definitely isn’t too hard. Like I said it can get pretty difficult if you turn the computer all the way up or fight an opponent who knows what he is doing, but at the very least you’ll breeze through the story.

Most fighting games have at least one broken character and at least from my casual perspective I feel like that would be Itachi here. When he activates his slow mode attack, you can barely move. It also lasts forever so he can get a bunch of different combos in the meantime. Even if you jump overboard and re spawn, his attack will still be active. That was the only fight where I almost lost in story mode and had to quickly cheese him out with final smash attacks. The computers don’t seem to dodge it very often. They either block or get hit, there’s never an alternative.

Overall, Naruto Ultimate Ninja 4 is a solid game. I think they should have gone a more traditional route as far as the story is concerned, but it worked out all right. I’m sure they learned from this after all. The character cast is fairly decent even if it doesn’t look too impressive because of the wheel they set up. I think a character roster should always let you see all of the characters at once like in Super Smash. That one is basically the ultimate template for a fighting game. I am now one step closer to owning all of the Naruto games which is pretty impressive. I’d definitely recommend checking this game out. It’s old enough where it’s retro, but modern enough where the gameplay still feels pretty intense.