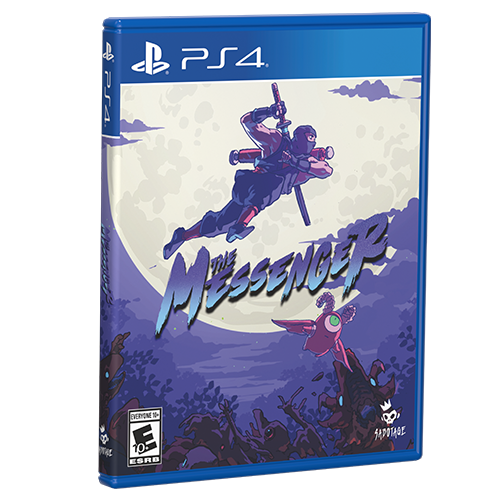 It’s time to look at a recent game known as the Messenger. This one takes your classic 2D platformer genre and throws in some Metroidvania mechanics. It’s also part parody so it pokes fun at a lot of the usual tropes. It’s a pretty solid game, but one that would have risen up to great status if it had just not added in the Metroidvania aspect. The title didn’t really need it to be a complete title as the story and length would have still been pretty sufficient.

The game starts with the main character’s village being attacked by demons. The lead had been complaining about how boring the place was so he starts to feel a little regret as everyone is slain and he is powerless before the Demon King. Fortunately there is a prophecy that a legendary hero will arrive to save everyone. Unfortunately the hero was late so he gives you a letter to deliver to someone on top of a mountain to really save the day. You are now the Messenger and the fate of the planet rests on you. If you don’t deliver this letter then everyone is truly doomed.

That’s the basic plot but of course there’s a lot more to it than that. The second half of the game in particular really throws in a lot of other elements like time travel and other dimensions. It’s all explained pretty well though so you’ll have no trouble getting what is going on. There is also a long cutscene near the end of the game to explain the origins of how this all happened. It’s pretty interesting and the game has a nice vibe to it. The main character has more personality than I would have expected.

The writing is particularly strong here. As I hinted at earlier with the parody elements, the script is a lot of fun. The characters are constantly throwing shade around and insulting each other. For the soundtrack, it’s pretty calming. The best theme in the game is the shop tune. There are 2 themes that are randomly selected when you go to the shop, but at least 50% of the time. You’ll be hearing the really hype tune. Then for the graphics it’s all very clear. It’s got that classic sprite vibe, but it’s not blurry or retro in the slightest. It’s like a very modern version of a sprite game and that’s definitely okay by me. You always feel like you’re in the driver’s seat.

Meanwhile the gameplay is just as solid. You run and jump through the levels and are armed with your sword as well as Shuriken. Those are the only weapons you have, but they get the job done. Then you have the interesting air mechanic which is basically an extra jump you get whenever you hit an opponent or an obstacle while in the air. This leads to some pretty intense platforming sections during the later parts of the game. You’ll actually have to try quite a bit if you want to clear those levels. It’s no longer a walk in the park. It’s a satisfying level of difficulty and there are constant checkpoints so you are never worried about being sent too far back. The game design was quite solid.

So far this is sounding like an amazing game right? Well, that’s because it was quite great throughout. From the start of the game all the way to the big confrontation with the demon king’s right hand man it was a fast paced adventure filled with great platforming and a solid level up system. After that is where the game hit a big hurdle. Up til this point it was a straight forward adventure, but after beating the demon you are sent back to the time chamber and must now go back through all of the old levels to find some music notes. Keep in mind that going through these levels took hours the first time. You are given some portal shortcuts to jump around, but not nearly enough. Get ready to spend 4-5 hours just running around collecting. To get a music note you must first do other things like helping explorers and dragons.

This part was pretty tedious. It’s handled far better than a game like Metroid since you at least know where to go thanks to hints from the shop owner. Of course that will cost you quite a few shards so it’ll keep you from buying other power ups for a while. You’ll be crossing the same levels over and over again multiple times as you try to near the end. This part just felt like it was here to stall for time and I think it shouldn’t have done that. I definitely prefer when things are linear or if you’re back tracking with a purpose. At the very least you should have the ability to quickly get to where you want to go instead of having to hoof it the old fashioned way.

Ah well, that’s really the only gripe with the game that slows it down quite a bit. Once you have the music notes then you enter the climax and things get pretty exciting again. All in all, the game had a lot of really fun ideas. The shop owner was definitely one of the best characters in the game but I also liked the lead a lot. The game throws a quick fake ending at you twice and both times it worked really well. I actually think it would have been awesome if the game ended with the first ending as it would have subverted everything so convincingly. It still works without ending there of course, but it shows that the writers really knew what they were doing. They made the game in a way where you would be satisfied no matter what.

As for replay value, there are some things to do here. When you beat the game you can start a New Game +. Additionally you can work to getting the Platinum Trophy in this game which certainly won’t be easy to do. I managed to get most of the trophies in the game but there are 2 tough ones that I feel would take a long time which is the dark cave one and another where you have to beat most of the game without dying. That’s a pretty tough thing to do, but if you’re dedicated to clearing the game then you’ll manage. I definitely recommend getting as many of the upgrades as you can early on. Earning money isn’t very tough so you shouldn’t have much of a problem. Getting the upgrade that gives you triple attack is extremely handy.

Overall, I’d recommend checking out The Messengers. It’s around 10 hours long so it’ll definitely last you for a while and it’s just a fun look at the platforming genre. Keep in mind that the second half of the game will slow things down, but all in all the first half and the climax should still keep things up. The game does end with a “To be Continued” message so maybe someday we’ll get a sequel. I’d be down with checking that out and it would be interesting to see where the plot goes from here. The ending was fairly definitive if you ask me so I’m thinking it’ll either be a totally new main character or he is just thrown into some crazy situation that the blue cloaked warriors didn’t tell him about.