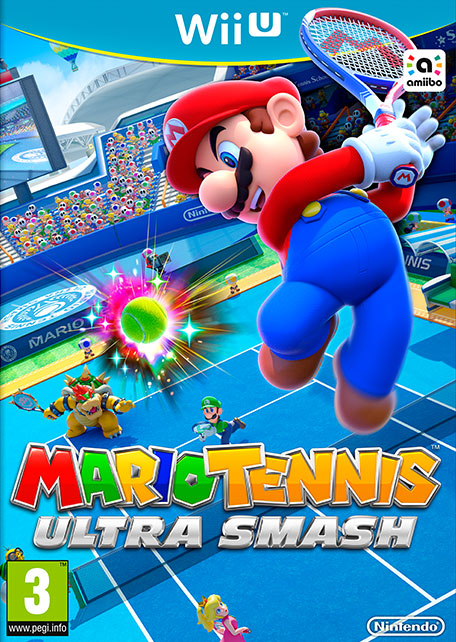 It’s time to look at one of the new Christmas games! I’ve always been a really huge fan of Mario Power Tennis for Gamecube and in many ways it was incredibly ahead of its time. The gameplay was exceptional and there was a good array of characters to choose from. There were many modes and the replay value was off the charts. Since then the series has struggled and unfortunately Ultra Tennis does nothing to escape from this. It ends up being a vastly inferior version of Power Tennis.

Right from the start you will realize that something is off as there is no Tournament Mode. You really only have 3 options here. Vs battles with the CPU, Mega Rally, and Online battles. There are some nuances here like Simple Tennis, Standard Tennis, Mega, etc. These are just different versions of the battles though. Gone are the minigames and such. You’ll just be playing a lot of Tennis so get ready.

This game really tries to get you to play around with the new Mega options. So much so in fact that this is the default Tennis game and is used in the survival mode rumble. Get ready for this to extend every match as it is hard to lose when you are big. The only real way to stop the computers is to also turn huge and at that point it’s just a lot of back and forth. I can tell you now that I am not a fan of this mechanic. It’s a very forced gimmick. I don’t mind having it as an option, but certainly not as the default. You just can’t get around it for most of the game.

The actual gameplay aside from that is unfortunately a step down from the last game as well. You now have a bunch of different shots that you can use based on the color of the circle next to the ball. I guess this is a way to let newer players know when the proper time is to use each one. The main problem with this is that it makes the game easier and makes those shots more effective. You’re now letting the game tell you what to do. Power Tennis had it perfect so why change the setup? Nintendo really went overboard with all of the extra gimmicks during this era. I would say that the new Mario Tennis for Switch could fix it, but I played a bit of that one and it seems like a step below Ultra so that’s worrisome.

Again, if you want to have fun you should go to the Simple Tennis mode. That one plays the most similar to Power Tennis and is just a far more rewarding experience. The matches are quicker without the turning huge part and it just feels a lot more natural. Still, if you like the new additions then you’ll be able to experience that everywhere else. Not for very long though as the game is quite short.

So I mentioned that there is no tournament mode so why are you playing anyway? Well, there are 25 achievements in the game. All of them are meant to grind the experience even further. You have to beat 15 opponents in a row with a bunch of different characters to get their Star form. You also have to play 10 games of each mode, get to 100 in the Rally mode, and make it to round 40 in survival. They’re mostly fairly easy or at least achievable with time, but you can tell that they just take a really long time to do. That’s easily well over 100 games if you want to do them all. Fortunately you can buy the achievements with money that you earn from the matches. It still takes a long time and I lost count of how many matches I completed, but buying them all is definitely the best way to go about it. I finished the game with 3 hours and 39 minutes of play time so it is considerably short. That is 100% of the single player content done. At that point all there is to do is online and local multiplayer. A good multiplayer game can last with just that, but this isn’t exactly Super Smash and there is virtually no reason to play it if you still have Power Tennis. As a result, I have to give this game the thumbs down there.

Still, to give it a bad score just because it isn’t as good as a previous installment just isn’t enough of a justification for me. If Power Tennis did not exist then this game would probably be more fun. I’ll acknowledge that the game could and should have been a lot better, but at its core it is a reasonable tennis game. The gameplay is still fairly entertaining and you’ll be able to play it for a few hours at least. The price isn’t that bad nowadays either. I recommend playing the Mega Ball rally a bit just because it’s at least a slightly different way to play here. It’s the only minigame that survived but what wrecks this one as well is the fact that you can lose if you beat your opponent. You have to keep the ball going back and forth so if you or the CPU loses then it’s all over.

Then there are the graphics which are quite good. The game still does look very modern. The colors are vibrant and the character designs are on point. That’s certainly what I like to see in a big Nintendo game. I’ll also give the soundtrack a thumbs up even if it isn’t the most original one out there. It sounds nice while you’re playing and that’s the important part. Even if the replay value isn’t high, the technicals are on point. It’ll be a fun game for a while even if the time is limited.

Overall, Mario Ultra Tennis is not the game changer that you would hope it could be, but it’s not a bad title. I do think the developers spent a reasonable amount of time with it. They just tried to be too inventive with the controls. It’s a Tennis game, they really don’t need to be doing anything too fancy with it. Just nail the fundamentals and the rest would come into place just fine. If you haven’t played the other Tennis games then this is a reasonable pick. If you still have a Gamecube/Wii though then I would recommend picking up Power Tennis instead. Trust me, I’ve put in over 100 hours on that game and it is legendary. You would not be disappointed in the slightest.