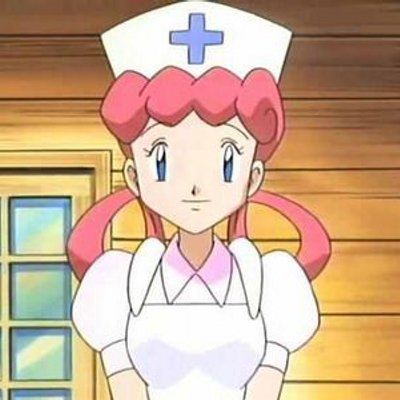 Suggested by Anonymous Nurse Joy and Cinnamon both prefer to help others than to actually engage in combat themselves. That being said, they are more than capable of jumping into the fray when they so desire it. Nurse Joy has a pretty good selection of Pokemon at her beck and call while Cinnamon has her dark form which amps up her abilities. While Cinnamon will definitely be outnumbered I believe that this is a fight she can win. Nurse Joy’s Pokemon aren’t quite fast enough to nullify her power. Cinnamon wins.

Cinnamon is a pretty nice reploid, but her abilities are mainly used for healing. Healing can be a powerful weapon, but a fighter needs to also have a nice range of attacks. Tony has his many different forms that are suited for various tasks and he would likely be able to overpower Cinnamon in his monster form. Cinnamon just couldn’t counter such a beast. Tony Tony Chopper wins.

Cinnamon is back. The Tripod is pretty tough, but when faced with a robot he has no shot. Cinnamon has some pretty good agility and power. Not to mention her various weapons and advanced healing. Tripod just didn’t have a chance I’m afraid. Cinnamon was too powerful. With this win she rises up the ranks. Cinnamon wins.

Cinnamon is a medical robot who knows how to heal. Of course she won’t be able to heal fast enough once Roll gets serious. Roll has super speed and has been shown to have enough stamina to keep it up for a while. Cinnamon never stood a chance against someone as powerful as Roll. Roll wins.

Pretty Boy may have a gun, but that’s not enough to stop Cinnamon. While Cinnamon’s mostly a healer she can still fight well enough to take Pretty Boy down. Pretty Boy has lost a lot of battles over the years because he’s just too weak to win against tough opponents. That’s why Cinnamon gets a win. Cinnamon wins.

Steel Massimo has his giant axe and with his super powers can shoot a giant beam that does tons of damage. Cinnamon wouldn’t be able to get up after being hit by an attack of that magnitude. This is Cinnamon’s final match of the arc. Steel Massimo wins.

Redips is a maverick with big ambitions. No one can say that he was weak. He was able to take on the legendary Zero. Cinnamon never stood a chance against someone of Redip’s level. Cinnamon drops again in this match. Redips wins.

Zero is a legendary sword wielder who can take down anyone who gets in his way. Cinnamon may be a good healer, but she doesn’t have the fighting experience that Zero has. Or his talent for fighting. Zero rises into the blog. Zero wins.

Cinnamon is back to fight again. This time against Axl. Axl can shapeshift and take down many fighters. He is in a league much higher than Cinnamon. Cinnamon doesn’t have enough skills to defeat Axl. Axl gets his first win. Axl wins.