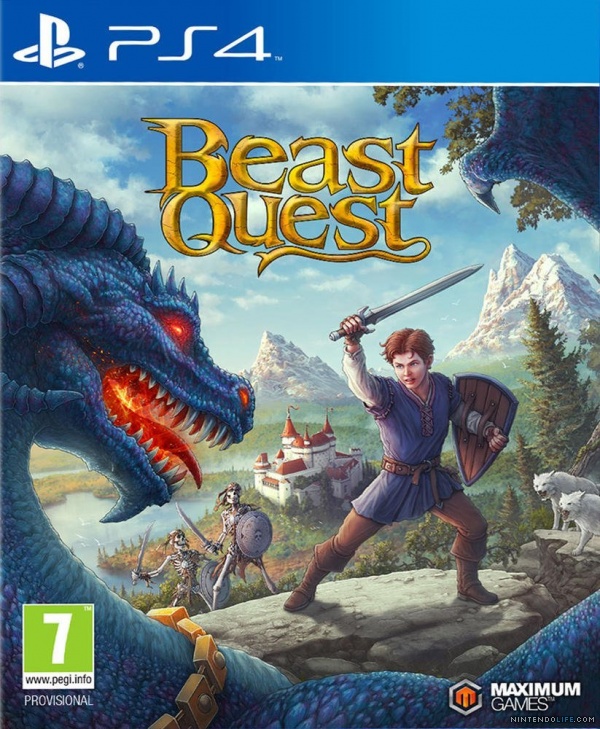 Looks like it’s time to jump into the world of Beast Quest. After getting the game it was tempting to check out the books, but since there’s well over 100 of them I quickly backed out of that idea. This game’s got a very retro feel to it. It reminds me of the old PS2/Gamecube games from back in the day. It’s hard to describe as you just had to be there, but the platforming elements are basic and to the point. There’s no extra flash or specific techniques here. You’ll learn all there is to know about the gameplay within 10 minutes. From there it’s off to the races. It’s definitely the kind of game where you can also feel your progression right away.

So the plot of the game starts with an old wizard heading off to meet with the son of a legendary fighter. He tells the kid that only he can save the world from the evil which plagues it. This kid is eager to get started so he quickly gets ready with his sword and shield. The old wizard lets him know that he has to free the 4 legendary beasts which have been put under the control of an evil wizard. Along the way the kid meets up with a girl and her wolf. Together the group must accomplish this quest and make the world safe to live in once more.

It’s a humble plot but a solid one nonetheless. The accents are on point and the game has quite a few cutscenes. Voice acting is definitely important for the immersion in a game like this one so I was glad to see that. As I mentioned this is a 3D platformer so for most of the game you travel through the lands following your compass and fighting enemies that you run into along the way. When you meet up with an enemy the game turns into a close quarters combat style. You can use a horizontal slice or a vertical one. You also unlock other attack options like a flame slash or an ice blast. You can block attacks with your shield or do a crispy dodge which allows you to counter attack. As you attack you gain more meter which you can use for other special abilities. As you attack you fill up a second meter that you can use for final smashes. Additionally you have potions to heal yourself with. The game’s difficulty is pretty balanced. You’ll have a hard time at first, but then it gets easier from there.

You have an extensive level up system. You get orbs from enemies you defeat and you use them to increase various stats like attack, defense, critical, health, etc. I highly recommend going for attack first. See, in any game with an EXP system my first order of business is to increase the exp you get. Likewise in mobile games where you have to collect orbs to buy things I always buy the orb extender first. In this game attack translates into orbs and I’ll tell you why. Unlike traditional EXP, you get orbs by beating opponents without getting hit or landing a multi-KO. That means you need to be able to swing hard so you can beat them before they have a chance to counter attack. if you max out your attack then you can beat virtually any enemy in the game before they launch a counter attack which is absolutely crazy.

The attack difference is also incredibly noticeable. You do almost 4X the damage by the end and even bosses will go down in an instant. Also, if you want to grind EXP then go to the very first level in the game. Since they’re the weakest enemies that means they ironically give out the most EXP. It’s definitely an interesting system and one that I can get behind. Then with your coins you can also buy health upgrades from the shop. I recommend buying more space in the bag so you can hold up to 7 potions. Once you have that then it is very difficult to lose. The collectibles are handled really well.

The graphics may not be all that impressive, but again they have a very retro look bout them. It looks like a PS2 game. There are some glitches sadly like when the ground fell away during a boss fight, but it did make for a good view. That was a glitch that I can get behind. The soundtrack is less inspired and you’ll forget all of the tunes almost immediately. They’ll go in one ear and out the other.

There is quite a bit of replay value here. The reason for that is due to the game having such a short length. You can beat it in about 4 hours and the trophies are all surprisingly easy. After collecting everything you just need to beat the game on hard mode and then you’ll be all set. It’s tempting to go for this platinum. It’ll be on the top of my list once I become a trophy hunter again someday. It does really help cover the 4 hour campaign and since the game is fairly cheap it makes for a good value buy nonetheless.

As for the characters, they aren’t anything to write home about. The main character is your average hero, but he is very quick to let some secrets out while he is chatting with total strangers. Fortunately the heroine is here to keep him on the straight and narrow. She’s definitely a lot more on task and her pet tiger is definitely fun. The old wizard seemed shady the whole time and I was expecting a twist but it just didn’t happen. The main villain isn’t too smart though. He arrives to gloat at the characters but then you find out that he actually can’t fight. A single shove nearly destroys him and after that somebody finishes the job. It’s definitely a brutal end for the character. Maybe next time he’ll think of a good spell to use before walking into such a dangerous situation.

If I have one complaint with the game it is that its map function can break at times. By clicking on the right hand side of the PS4 controller’s touch screen you launch a glowing mine that shows you where you have to go. You chase after it like in Mirror’s Edge until you get to where you need to be. The problem is that it gets confused sometimes and just leads you in circles. At that point you have to use the master map and just find the next location the ole fashioned way. I don’t get why the map wouldn’t work at times. I’m thinking this part just wasn’t play tested the way that it should have been.

Overall, Beast Quest is more fun than you would expect at first glance. I definitely recommend checking it out. Once you’ve gone on the quest there is just no turning back. It’s a real page turner in video game format. I think one of the reasons why it works so well is because the layouts are all very clear. It’s got a clean interface and you actually feel like doing the side quests and such because they’re all just a lot of fun. So pick up this game and if you’re having any difficulty just make sure to upgrade your attack and you’ll be just fine.