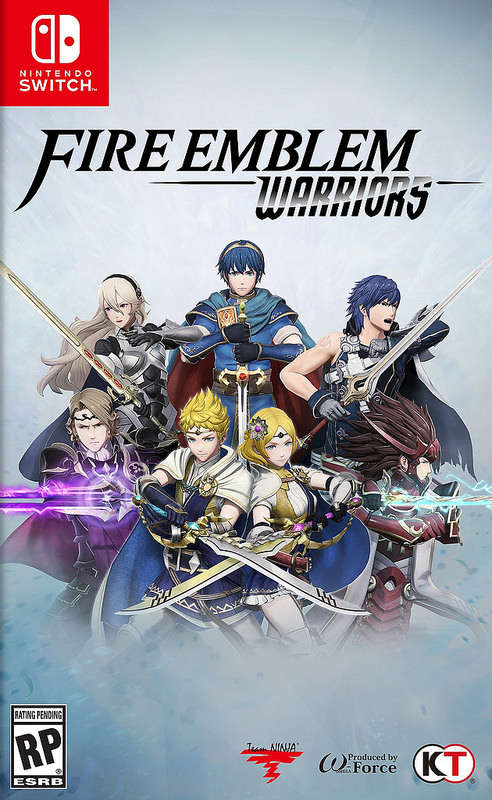 After all these months I finally went and got the Nintendo Switch. Now I’m playing with power! I’m still not a big fan of the console, but it’s not bad or anything. I do like the fact that it’s essentially a portable console that you can stream to the tv. It’s one of those brilliant ideas where you can barely believe that nobody has thought of it before. Mark my words, if Sony ever makes another portable console they are going to borrow this concept. Let’s take a look at my first Switch game.

I became a big Fire Emblem fan pretty recently after downloading Heroes. Its a franchise with a lot of potential and has a fan of sword fighters in general it was right up my alley. The plot focuses on a prince and a princess. Their kingdom is attacked by an army of monsters and everyone is imprisoned within its walls. Only the two main characters and their reliable friend manage to escape. Before they return, the heroes will need to uncover the 5 legendary Hero Gems. Since dimensional rifts are opening up everywhere, it shouldn’t be too hard to find them, but time is of the essence.

It’s a really fun story. I probably would have preferred the game to have focused on characters from the older games since I know the modern characters pretty well, but the crossover aspect still makes it all a blast. There’s also a lot of room for a sequel as a result since they could explore the rest of the universe. The original characters made up for the game may have been rather generic, but they weren’t bad. Monster fans will love the Chaos Dragon and I didn’t mind the guardian of the main characters until he basically cracked. Not much to say about the blond heroes, they’re super heroic and that is their personality in a nutshell. Even with 20+ chapters, the story never feels like it’s stalling for time or going nowhere. It’s pretty well paced.

There is also a History/Legend mode. I forgot the exact name, but essentially the overworld looks like an old 8 bit Fire Emblem game. You have to move across the field and whenever you bump into an enemy it triggers a level. There are challenges like beating 500 enemies in 20 minutes. It seems like a decent mode, but I can’t say it’s too appealing compared to the main story mode. I’d probably use it for grinding level ups and at least it does help the overall replay value.

As expected of a new Switch game, the graphics are quite good. The interface is also cutting edge so everything feels very smooth and streamlined. There’s a lot on the menu at any given time but the game does a good job of not letting it get overwhelming. The final smash attacks are also very satisfying to unleash. The soundtrack is also really good. Longtime fans will remember most of the sound effects. In fact, they are the same as in Heroes so I wonder if it’s just a Fire Emblem staple or they’re aiming for a lot of synergy with the new games. Either way it can feel nice and nostalgic at times.

One of the aspects of the game that was promoted before the game came out was how it was a beat em up, but it was going to incorporate Fire Emblem mechanics. The game does this by bringing in the weapons triangle where Sword Fighters beat Axes, Axes beat Spears, and Spears beat Swords. Unless you play on hard mode though, it won’t make much of a difference. You will have the enemies begging for mercy very quickly regardless. You can also give orders to your allies for retreats, advancing, or just ditching them in the middle of nowhere so they won’t get hurt. It’s definitely useful if you think they are just going to hurt themselves. They typically can’t hold their own against opponent fighters after all.

If you’re familiar with the genre then you’ll definitely know what the gameplay is like. If not, essentially it is a 3D fighter where you destroy hundreds of opponents in each level as you head for a boss somewhere in the map or secure a retreat route. You have quick attacks, power attacks, special moves, a grab, final smash, and an awakening mode. As a result you can see how you have a bunch of options. This means you can have fun mixing up your attacks. Sometimes I even forget to use my awakening since I’m waiting for the right moment and just end up beating the level before it occurs.

I feel like there are 3 kinds of beat em ups. There is the Dynasty Warriors style where you beat a lot of enemies, but it’s not an insanely large amount. It’s slightly more realistic and also the worst of the 3. Next there is the Sengoku Basara/Anime titles like Bleach or One Piece which have a lot of enemies and you take them down. They are essentially the beat em games that come to mind. Finally there are the crazy good beat em ups like Hyrule Warriors and this game. Somehow Nintendo really gets the company to take it to the next level. The amount of enemies around at one time is crazy. I thought Hyrule Warriors was just about perfect and this game manages to improve on it even further. One incredible feature that this game brought to the table is that you can now switch between allies instantly. This makes it much easier to attack and defend. For example, you can order Lucina to attack a base, Marth to stay and guard yours, and you go after the boss. If your ally starts to lose the battle, you can quickly become the ally and fight back while the character you were controlling earlier will continue the mission. It’s brilliant since one of the only annoying aspects of the genre is that protecting all of your bases can be difficult since your A.I. compatriots just hold you back. Now you can really feel like you have complete control of the battlefield. It’s also perfect for when I go maverick and just disobey direct orders. They want me to retreat or protect the base? Nonsense, I’m heading straight for the big boss!

The game also did think up more ways to prevent you from essentially cheesing the level like that though. Sometimes the areas can’t be accessed without using a flying ally to go past the pits and activate portals. Other times the base is simply locked down until you beat all of the bases. I do think it’d be nice to have more levels where you were just able to rush up the middle but I can kind of get why the developers wouldn’t want you to just rush through everything. As it is, I went through the story at a normal pace and I still didn’t get to explore most of the customizing options. It can all seem rather overwhelming since you have crests to level up and actual level ups to buy. I’d definitely be content with the game sticking with Level 100 as the cap and not raising it. It would be quite the grind, but at least I can actually imagine getting everyone to level 100 at this point.

Overall, There is a lot to love here. This game is basically a masterpiece and I’d consider it to be the greatest beat em up out there. It would be very hard to improve on the gameplay at this point. The patch that the Switch got even allowed me to play the game with the greatest controller on Earth, the Gamecube controller. The story was impressively long for a beat em up and a lot happened along the way. Lucina got to look really cool in her debut appearance and the other heroes had their moments as well. There’s a ton of replay value here as you can tell like beating all of the levels on all difficulties and getting everyone to the max level. I think there is actually one possible way that you can top this game within the genre. Imagine this game, but multiplayer where the 2nd player plays as the opposing army. That would be a blast as you both try to take over the map. I do think it’d work best online so that you wouldn’t know who each player is playing as. That would add to the depth as you wonder which base to protect. I can’t imagine that would be an easy game to product since it would probably take a lot of memory and be tough on the A.I., but it’d be awesome. Well, with LoZ and FE done, I’d like a Metroid beat em up next. It’d be cool blasting through waves of Metroids, but the developers will have to get creative about which other heroes to have playable.