Stats time! The game doesn’t let you load the completed file so I couldn’t look at the stats in more depth. This is the jist of it though…..yeah. The game definitely needed a level select. 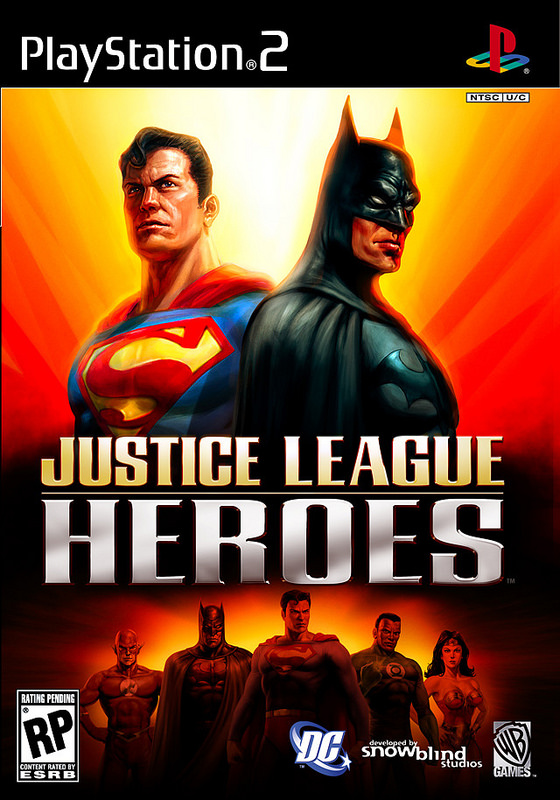 This is a game that I’ve wanted to get for quite a few years. The Justice League rarely get their own video games after all and this seemed like a nice counterpart to Marvel’s Ultimate Alliance. Personally, I actually consider this to be the better game, but more on that later. I actually originally got this game for the DS, but playing it on big console is certainly a different experience. Both versions are a blast, but this one is certainly better.

The plot revolves around Brainiac’s plan to take down the League once and for all. Robots have started showing up in cities around the world and a lot of villains are also in on the scheme. Ranging from White Martians all the way to lesser enemies like Queen Bee. One thing’s for sure, the League is going to have their hands full. They are the world’s strongest heroes though so there is nothing that they can’t stop if they put their minds to it. Is this scheme really everything that it appears or is there another villain lurking in the shadows? Time to find out!

The gameplay is similar to Marvel’s Ultimate Alliance. It is mostly overhead although slightly 3D so you’re not too far from the actual fight. Each character has their standard attacks and power moves as well. You can link them into combos, but you really only need your standard attacks to get through the game. There are also 4 special moves per character those really tend to come in handy. In particular, I recommend upgrading the projectile attack that your character has as those can be quite useful. Whenever you get a level up, you will obtain two upgrade points. Rather than putting a little bit in each category, I’d recommend maxing out on something. Health, Power, or your Projectile are the three best options in my opinion. Max them out and you’ll be fine.

It’s worth mentioning that in this game all characters have health regeneration on their side. This means that if you are getting overwhelmed, you should try to run away. Flying away is typically ideal. Most opponents will go down quickly if you just fight them head on, but challenging a group is not recommended. They can drain your health all the way in a very short amount of time so you won’t be able to escape. Bosses are typically easier since you can hit and run as much as you like until you claim the win. Queen Bee is annoying though as she is very fast and actually camps you out from time to time. If only there was a good way to lock on and actually get the hits in.

Graphically, the game is pretty solid and we actually do get some nice cutscenes. It was a fun story and while the voice actors may have not always matched the characters well, they were still fun to listen too. Superman was a little out of character for most of the game though. He really flew off the handle once Darkseid showed up and turned into a total renegade. The team made up by the end though and at least Superman made for a good AI ally. In these kinds of games, your partner will usually die easily and you have to worry about defending them the whole time. That’s not the case here as I was the one who kept on dying so finally I just let Superman take the lead. He dealt with the minions and that definitely worked for me.

The soundtrack is fairly bland. You won’t really recall any of the themes after playing it. I suppose that anything would seem bland after hearing the classic intro for the first time. Seeing the narrator remind us that the Justice League is the strongest team in the universe was definitely neat as well. He’s got a point since the rest of the comic book teams pale in comparison to the good ole JL.

It’s a fairly short game that you will be able to breeze through. It isn’t too short though and considering that you can purchase it for a low price, it’s definitely worth the money. As they say, quality>>>quantity. You’ll be having a blast with each level and it’s the kind of game that has a lot of replay value because the actual levels are fun. There isn’t a VS mode though so you’ll mainly just be playing the game again to max out all of the characters. Once you’ve purchased everything and gotten them to the top, you’ll have completely finished the game.

The main reason why the levels are so fun is because the level up system was handled really well. Getting to the next level always feels very achievable and doesn’t take all that long. The power ups are noticeable in the gameplay and makes it all feel worth it by the end. That’s actually why I liked the classic DS port of this game so much as well. I actually did max everyone out in that game and I played it quite a lot back in the day. The main unfortunate part is that the DS version didn’t really have a story mode. Sure, there was a semblance of a story in there, but they cut most of it out. I suppose this was due to DS limitations or something like that. Both versions are really addicting, but the DS one is in more of a Pokemon Go or 1010! kind of way while Justice League Heroes is in more of a standard AAA video game style. The PS2 version wins out of course, but you should buy them both while you still can.

One thing that is pretty funny though is how Heroes basically copies the last part of the story directly from the final two episodes of the DCAU TV show. Unlimited ends with Lex trying to resurrect Brainiac and reviving Darkseid instead. In this version, Brainiac tries getting unlimited knowledge and gives himself a power up, but it turns the guy into Darkseid. The game only came out around 6 months after Unlimited finished so that was enough time to watch the episode and then turn it into a fun climax. I think it would actually have been fun to have seen a game adapt more episodes from the classic show and I’d still love to see a PS4 game do that. Imagine fighting the Justice Lords in a big 3D environment? That’d be a lot of fun. Heroes even manages to adapt most of Darkseid’s famous speech about despair before he would finish off Superman. Of course, Darkseid’s voice is a lot different. It’s fun and certainly super deep, but the TV show definitely wins here.

Overall, Justice League Heroes is a very solid game and one of the better comic book titles. The Superman Gamecube game is probably still the definitive single player experience and when we go to multiplayer it’s hard to deny X-Men Next Dimension or Marvel vs Capcom, but Justice League Heroes can hold its head high and play with the big boys. It’s certainly the best Justice League game as well. The story adds the extra dimension to the game and there is even a fight in one of them as we see Darkseid take down the whole league. There were some iffy moments like when Batman actually lost to Killer Frost, but we can chalk that up to him just not having enough prep time. Batman definitely wouldn’t fall for the same trick twice! With this game review completed, it’s hard to say which one will be next. It could be the Pizza Delivery Boy, World of Final Fantasy, or possibly even Professor Layton.