Stats Time (Not much tho) 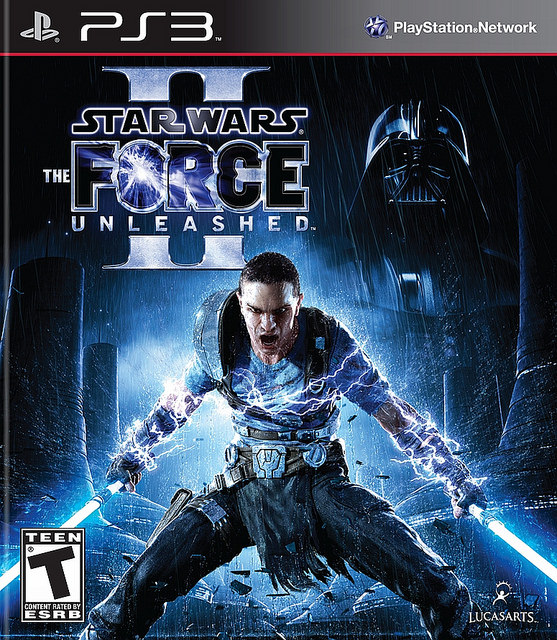 It definitely didn’t take too long to get to the big sequel to the original Force Unleashed. I enjoyed the first game quite a bit so I was excited to see what the sequel brings to the table. Ideally a sequel should always be just as good or better in every way. This sequel managed to pull that off in all areas aside from the plot. Is it enough to get that extra star and nab a 9 or will it continue to elude the game? Time to find out!

The game starts with Starkiller waking up in one of Darth Vader’s training rooms. The Sith explains that this Starkiller is the only clone to have been a success and that the original Starkiller is dead. This clone has all of his powers and memories and Vader will make him destroy the Jedi. Clone or not, Starkiller decides to escape instead and manages to find his old resistance teammate, the blind Jedi. The Jedi claims that Vader is lying and Starkiller is the original. Starkiller’s not sure what to think about all of this, but the main heroine is in trouble so he decides to launch a full scale attack on Vader’s base. Ultimately, his origin won’t matter as long as he can save her.

I don’t really mind the game keeping it ambiguous as to whether Starkiller is the genuine article or not. It adds a little tension and who doesn’t want to see some of that in the story. As long as it isn’t overplayed, it works well. Unfortunately, the story still was a step down from the first. It’s still cinematic and feels like a movie, but it’s a movie that doesn’t have much of a plot. It takes a while for Starkiller to decide what to do and by the time he does, the story is over. You could sum up the game’s story in a few sentences. Starkiller returns and meets up with his old pal. The two of them make it to the resistance base, but it was destroyed. They head over to Vader’s base and blow it up as they save the heroine. That’s really all that happens in this game.

Of course, the game was quite short so it was never going to have the same amount of content as the first game. Still, I was expecting a little more. Admittedly, part of the fault is in the fact that I thought the game was more about choosing between good and evil the whole time like in the Shadow The Hedgehog game. It turns out that only the ending matters like in the first game so it’s quite different from what I had assumed. The game is supposed to be roughly 5 hours long and that sounds about right. Hardcore gamers can finish it in one sitting although it took me 2. 5 hours of straight gaming may have been something I did more back in the day, but that is really a long time to be sitting down.

Granted, the ending is quite great just like in the last game. I ended up obtaining the dark ending. I wanted to make the hero call of course, but then the villain started to goad me on and I decided it was time to end him. A pretty shocking moment occurred and honestly it was all handled beautifully. As always the blind Jedi was supremely annoying, but I suppose that couldn’t be helped. Personally I’d say that the Starkiller in this game is a clone. It’s not really a spoiler since I know people have gone either way with this although most see it the way that I do in this case. That being said, he may have been more likable than the first one.

The gameplay is a lot smoother than the first game and I was hoping that would be the case. It’s the same core gameplay as it’s a 3D hack and slash title where you have other abilities at your disposal as well. You can shoot lightning and harness the force to protect yourself. This time you have 2 Lightsabers and you can switch out their crystals to give the weapon other special abilities. I recommend the extra EXP ones since those really add up by the end. The combos are a lot more fluid and the tutorial is fast while also being comprehensive. You’ll really feel like a Jedi Master as you slice through dozens and dozens of opponents.

There are a lot of cubes to find and trophies to collect which should add to the replay value. It has about the same kind of bonus content as the first game so there’s not much new to be on the lookout for. Just grab all of the cubes that you can and level up. It’s considerably easier than the first game as well I might add and that is probably because of how much smoother it is. I died quite a few times in the first game because my lightning wouldn’t lock on, but that’s never an issue here. With the original’s story this would instantly be a 9. As it is, it is a close call. The gameplay is amazing, but the experience is relatively short.

You probably figured this from the first game, but the graphics are still quite great. They have improved from the first title which is saying something. This is definitely pretty high end even for the PS3. The soundtrack is a little more forgettable though. Surprisingly both games didn’t really have any memorable tunes. I guess this game had to have a weakness somewhere right?

Speaking of weaknesses though, I did think that some of the quick time events were a little too hard. Not in terms of timing as that was pretty normal, but the events where you had to press a button really quickly. I just couldn’t push it fast enough and had to keep trying different ways until I finally nailed it. There were around 3 bosses like this and they just didn’t feel fair or balanced. I can’t imagine how a kid would get through these levels. I definitely have to respect their button mashing skills if they pulled it off.

Beyond that, I am still a big QTE fan as always. Personally I think it makes the boss fights more epic. I know some don’t care for it and I can see the negative side (Losing near the end of a long QTE sequence and having to do the whole thing over again) but it’s certainly still a positive in the end. As for the story which I keep taking subtle shots at, I just felt like the writing for Starkiller was a little all over the place. At times he was fairly quiet and treated like an experienced veteran. Then he would suddenly talk and then he wouldn’t stop as he panicked about everything and did a ton of yelling. The former is what I expected of Starkiller while the latter just feels out of character. He’s just a lot more emotional than I would have expected at times although he still makes the rational choices in the end.

I did say that I liked him more than the first Starkiller though and that’s because he’s just a little more intense. He makes the controversial decision to abandon the alliance so he could save the heroine instead, but it’s a move that I can go with. The rebellion is always falling to pieces anyway and they were okay with sacrificing her so naturally that was not okay. Starkiller made the right move. The game’s ending is quite dark no matter which ending you ultimately ended up going for. Naturally mine was incredibly dark but probably the more hype ending. It just seems like Starkiller can’t catch a break. I’d love a sequel to this game, but it seems like it isn’t to be.

Overall, The Force Unleashed II did everything you could ask for from a sequel. It tightened up the already solid gameplay to make it even better. It improved the graphics and still gave us a full cinematic story. There’s also a good amount of replay value here and none of the trophies are too crazy. You’ll have a blast from start to finish. Even if the story isn’t quite as intense as the first game, you’ll still be pretty reasonably hooked during it and the climax ends the game with a bang. Now if only we could get a multiplayer mode.