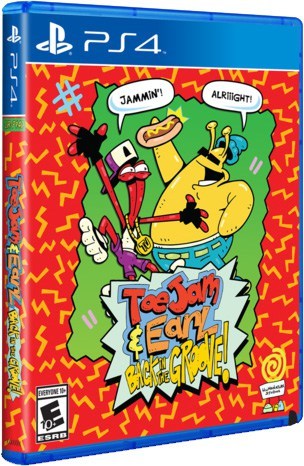 It’s time to look at a sequel to a game that came out quite a long time ago. I know the name of Toe Jam & Earl because of how crazy a title that sounds. Beyond that I can’t say that I know almost anything else about the franchise. You don’t really need to know much else though because the plot isn’t all that expansive. It doesn’t seem to matter whether or not you played the other games as you’ll quickly understand what is happening anyway. The gameplay is definitely pretty unique, I wouldn’t say that it’s all that good, but I suppose I can see the appeal if you’re playing with friends or something.

The basic plot of the game is that Jam and Earl are on a spaceship with the two heroines. They’re ready to finally head back to Earth, but by mistake they press the black hole button and end up sending themselves and the planet into another dimension. They must now recover all of their rocket parts in order to head back home, but that will not be an easy ordeal. No, if anything it may just be the hardest thing they’ve ever had to do, but the toughest choices require the strongest wills. They will have to be careful as the humans would like nothing better than to destroy the aliens who messed up Earth.

Now I’ll describe the gameplay so follow along as best you can. The game starts you off on a level with an overhead view. On the level you have a bunch of interact-able objects which include humans, demons, creatures, bushes, trees, houses, phones, etc. To get off of the level and onto the next one you have to hop in an elevator. It will take you to the next level. Also, keep in mind that the levels are used much like in the real world so by “Level 2” I’m saying that you are one floor higher. The game has 25 levels and the goal is to reach the end while obtaining 10 rocket parts. If you don’t have the 10 rocket parts by the time you reach the top then you have to go back down to find them. To get back to an earlier level just keep jumping off the level and one by one you’ll get down. You can also take an evil elevator to go down by one, but that’ll hurt your health a lot. Keep in mind that villains can also knock you back down floors so then you have to run to the elevators again.

The levels each have a map which automatically appears when you start, but it is all covered in fog until you move around. Every square of the map that you explore will give you 50 XP. When you level up you randomly get an increase to 3 of your stats from the local wiseman. These stats include speed, (Easily the most important stat) health, luck, present skill, and a few others. You get 300 XP every time you open a present, but they are always risky. One present is a bomb that will cause you to instantly lose a life. Another one is a thunder cloud that will follow you around for a long period of time until you lose a life, etc. Others are good as they give you a speed boost or some health back.

These are just the tip of the iceberg when it comes to the gameplay mechanics. It’s a lot easier to understand once you’re actually playing compared to when you hear about it. Basically the goal is to go through all of these levels and dodge the enemies. You can’t fight back except for when you have certain items so really it’s like a stealth game. Just dodge everyone and try not to get hit. Problem is that you’re slower than just about all of the enemies so you need to always be prepared to jump into the water to avoid them. Don’t drown though as your air meter goes down real quick.

There’s not a whole lot to do here though which is the big issue for the game. As I mentioned there are 25 levels, but that’s it. Some levels can take you seconds to beat while others are significantly longer. I managed to beat all of the levels in what’s considered the tutorial arrangement, made it to 13 in Fixed Mode and 15 in Random. Still, even as the names switch it is the same levels each time. It has the feel of an arcade game as you just play it over and over to get a high score. It’s not necessarily a bad thing, but the game feels a lot more like a free to play than a modern PS4 title that you would pay for. You can potentially finish this game in around an hour.

There’s no real replay value unless you really love the gameplay style. Your progress is always deleted once you get a game over so aside from remembering your level or how quickly you beat them all there isn’t even a record to try and break. That’s one of the things you would at least expect to have when you’re playing the same campaign over and over. After the opening cinematic the plot is also over so you won’t see anything else until you beat the game. You also won’t see the ending unless you beat the game in Fixed or Random mode. Basically, it would be fair to say that the game doesn’t really have a story.

Based on the trophies it does seem like the game is mostly geared for multiplayer though. You can play the levels online which allows randoms to join your game. That should make the levels a lot easier to beat even if it will make things more chaotic. I wonder how the screens would work there like if the 4 players have to stay on the same level or if you can divide and conquer. I’m sure that would add a little more flavor to the game, but multiplayer can theoretically do that with any game.

I think at the very least there are 3 main improvements I would have the game do to really make a difference. One it to get rid of the auto death from the presents. The presents shouldn’t have the risk of destroying you in one hit for using them. Why make the presents that risky? It’s very hard to live without them especially since they are your main source of XP, but completely dying from one seems unfair. (Yeah, I died from one…) Another part that is lacking a bit is the constant loading screens. This may be unavoidable depending on the budget, but every time you go inside the elevator you have to sit through a long loading screen as the elevator goes up and the hero makes some snarky comments about it. These are unskippable and while they aren’t quite Sonic 2006 level, they happen a lot more frequently. Put it this way, every playthrough you are guaranteed at least 25 loading screens minimum. That’s a bit much. For number 3, I would add actual save points. I don’t think dying should erase all of your progress. I understand that this is a game decision though, but it’s one that I would have changed.

As far as the graphics go, they look like the online computer games you would play as McAfee. (Probably spelled a little different) You could easily see these kind of graphics in online computer games form 10-15 years ago and definitely can’t compete with modern ones. To an extent the graphics are likely intentionally old to mirror the retro style the game is going for though. It’s extremely undetailed and looks more like a NES game than a PS4 title, but as an artistic choice it’s not terrible. It won’t take you out of the game or anything. The soundtrack is pretty limited, but the tunes aren’t bad. It definitely gives you the feel of the game right away.

Overall, Toe Jam & Earl is definitely a unique game as I mentioned. The name is still a little hard to actually say with a straight face so I’ll mostly be sticking to calling it Jam & Earl IRL. It feels more like an experience game or one of those really old arcade style titles but without the high scores. The gameplay is fun enough, but there wasn’t a lot of incentive to keep going. At least it’s not really my cup of tea but if you want a shot of nostalgia and grew up with the series then I’m sure you’ll like it. While there isn’t a whole lot of content the game can still last you for quite a long while if you just keep replaying it a lot. I’d sooner recommend Asdivine Hearts and Owlboy though. I’ll wait for the next re imagining of Jam & Earl to see if this franchise can really make its mark on the industry.