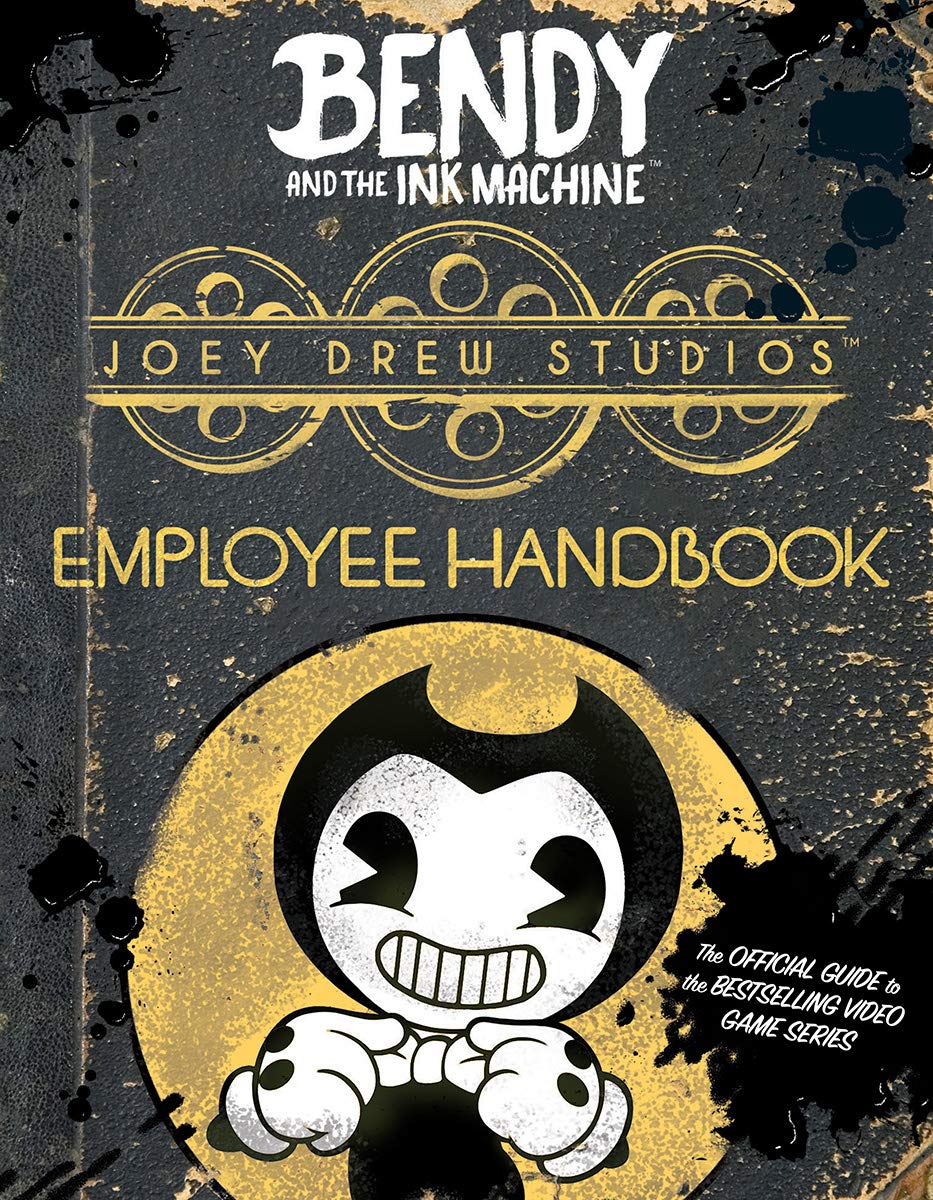 It’s time to look at the Bendy guidebook that came out a while back. I like the angle of calling it an Employee Handbook as it guides you through the inner workings of the company. The first half of the book is basically a walkthrough of the game and then the second half gives you illustrations, concept art, and fun facts. It’s a fun way to learn more about the universe of Bendy. Also if you missed out on a lot of the audio tapes like me you get to see them all here which is pretty cool.

It’s been a long while since I’ve written a book review and this one doesn’t technically have a plot so it’s definitely a nice way to jump back in. There’s really nothing negative to say about the book because it does a really good job of getting you the information you need. The writer had a lot of fun with the script here as there are a bunch of inside jokes. Things take a sinister turn now and then with the narrarator always having a passive aggressive tone. They let you know that taking vacations is not going to happen here and double down on the fact that you should be really happy at the job.

You learn through clippings and employee quotes that most of them aren’t getting paid for the overtime they put in. Additionally they have to work in a very noisy environment and there is a ton of office gossip. It sounds like Drew really got more and more corrupt as time went on. He didn’t even give too much credit to the guy who built the amusement park for Bendy. As the book goes on you really see how the whole thing spiraled out of control. I think all of the blame can really fall to Joey here though. He seemed to know or at least suspect that something wasn’t up but did nothing to stop it. He pit employees against each other and kept making the work conditions worse until something had to give. His special projects also ate away at all of the organization’s budget until it naturally had to go under.

Sammy definitely seems like the diciest person on the staff. He appeared to be losing his mind early on so it doesn’t even come as a surprise when he goes off the deep end. His appearance was one of the most powerful moments of the whole game though and I was a little sad that we didn’t get more development for him in the book. He’s a pivotal figure and while this is the kind of series where we likely will never get all of the answers, it will still be cool to learn a little more about him.

I did learn how to draw Bendy at the end of the book which was pretty cool. I didn’t try to draw his partners yet since they seem a little more complex but I’ll add that to the bucket list. It’s a nice little addition that I’m glad made it into the book. I also took a look at the bacon soup recipe which sounds reasonable, but I’m not a big soup fan so I’ll probably skip on that. I feel like I’m not a big fan of soup because I like my food to be solid. It would explain why pudding and jello don’t really rank for me either. I’ll eat em all of course, but they aren’t my first choice.

There’s not much else to say here but I’m ready for that Bendy sequel. I know they are saying it’s not a total sequel in some ways, but I really hope it is. Maybe that’ll be some kind of plot twist. Really the game doesn’t even need to answer any plot questions, I’m just ready to learn more about the time loop and fighting off Bendy a little more. It’s impressive how many theory videos there are about Bendy. That’s the kind of following you get when the writing is on point and you build such an interesting lore into the game.

Overall, The Employee Handbook is a pretty fun book to read through. It’s definitely helpful for trying to get the Platinum in the Bendy game since they show you all the collectible locations and give you tips along the way. You could even read it as you play through the game although I wouldn’t recommend it since part of the experience is experiencing everything first hand. The book would spoil some aspects for you if you’re doing both simultaneously. Even if you don’t buy the game it’s a pretty interesting look at the back-end and maybe it’ll even convince you to buy the game. It’ll definitely have succeeded in a major way if that’s the case. 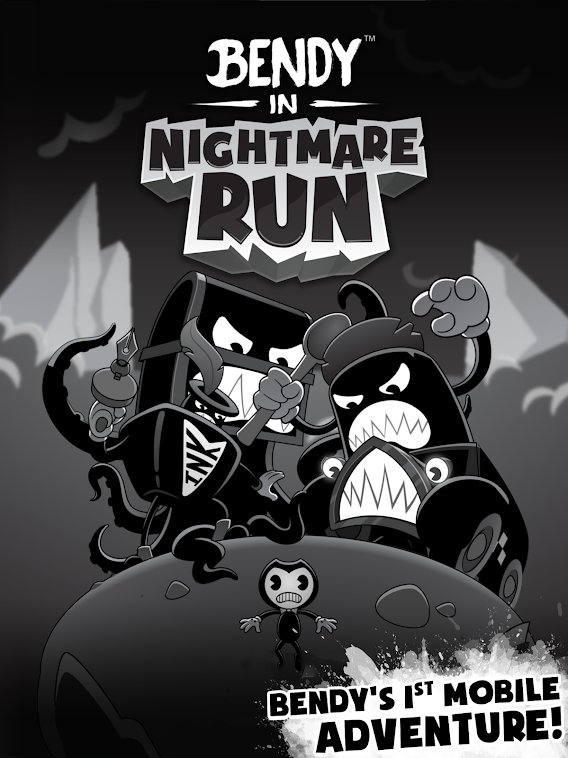 It’s time to look at the latest Bendy game. It’s been a long while since I played a new mobile title so this was a fun detour. It’s not a game I would keep in the longrun because unlike most of the others it actually isn’t endless. You can actually get through all of the content pretty quickly I got through all of the worlds in under a week and by that point there isn’t a whole lot to do. It’s a fun game though and I do like free runners.

Naturally there isn’t an actual plot here. There are 4 main chapters and each one has 6 levels where you fight the same boss only he gets more health each time. As a result there are really only 4 unique levels so the game actually feels pretty low budget compared to most. The Ladybug game had a similar format, but a whole lot more content and a better reward system. In short, this is a free runner you would play because you like the franchise, but otherwise there isn’t really much of a reason to pick this one.

The gameplay is pretty easy to understand. You can move from side to side and there are 3 different lanes. You can jump and when you touch a weapon you tap the screen to fire it at the villain. The goal is to land enough hits to knock him out while dodging his attacks. When this is done you’ll have won the level. Rinse and repeat as you go through. The only thing that really tends to change in the level is how long the boss will last and naturally his attacks will also get a little quicker. By the time you’re in world 3 or so you’ll likely know the game well enough to beat the levels without taking a hit.

There isn’t much opportunity for the game to show the graphics since it’s all very repetitive, but the game looks fine. You can only expect so much out of a mobile title of course. It’s definitely not as high grade as the big Nintendo ones or something like Dragon Ball Legends, but ultimately I would say that it works out pretty well. You can at least see what is happening at all times. The soundtrack is pretty limited though and while it’s going for a happy feel since this is the more heroic Bendy, it would have been nice for some of the horror tracks to slip through. I think it would have made the game a lot more ominous.

As it’s a mobile game there is naturally the pay to play aspect of it. Rather than limit your game playtime through an energy meter the various level are locked behind soup limits. You need 15000 soup cans to unlock the final world after all. You can pay a few bucks to do it or just keep playing the old levels until you have enough cans. You can get around 1000 cans during a first play through of a level or you can just drag out the levels for as long as possible to get more cans. It will take a while to get everything though. Then you’ve also got special abilities which cost a lot of cans and you also need to buy extra slots to use them.

Unlike Ladybug it does feel like it takes a very long time to get all of these power ups so you can expect that you won’t have most of them by the end. At the same time once you have beaten the game it’ll be pretty easy in comparison to buy the power ups. They definitely aren’t as expensive as the main story chapters. Of course, with no more levels to play what would be the point in buying the rest of the items? I think where the game suffers a bit is in how there is no real post game. There isn’t a multiplayer or anything to test your skills and the actual amount of content is surprisingly small. It’s odd since for mobile games usually the whole point is to have endless content but I guess this one didn’t want to bother with that.

So it’s really going to depend on how much you enjoy the game. One thing you can also do to avoid the grind is simply download the game around 1-2 weeks in advance and simply log in. That will give you all of the daily bonuses and then when you play the game you’ll already have enough gems to blast through the story. I’ve thought about that for some titles, but once I have the game downloaded it’s real tempting to just start playing it right away. Still, if you really don’t like having to wait then it’s ultimately your best bet.

Overall, This is a good mobile game. It is really carried by the fact that it’s part of a franchise though. Ultimately there is no other real reason to play it when there are simply better versions of the game available. I always think you shouldn’t score a game relatively like that though. Just because there exists a game that is better in every way it doesn’t make the other title any worse. So, if you look at this game independently then it’s still pretty fun. Also, it’s a free title so at the end of the day the fact that it is good and will last you a few days is pretty satisfactory I’d say. Now that the game is completed I’ll be deleting it, but it had a good run. My next mobile game likely won’t be until the new Dr. Mario came comes out, but that one definitely looks like it’s going to have a whole lot of content so it may last a bit longer.