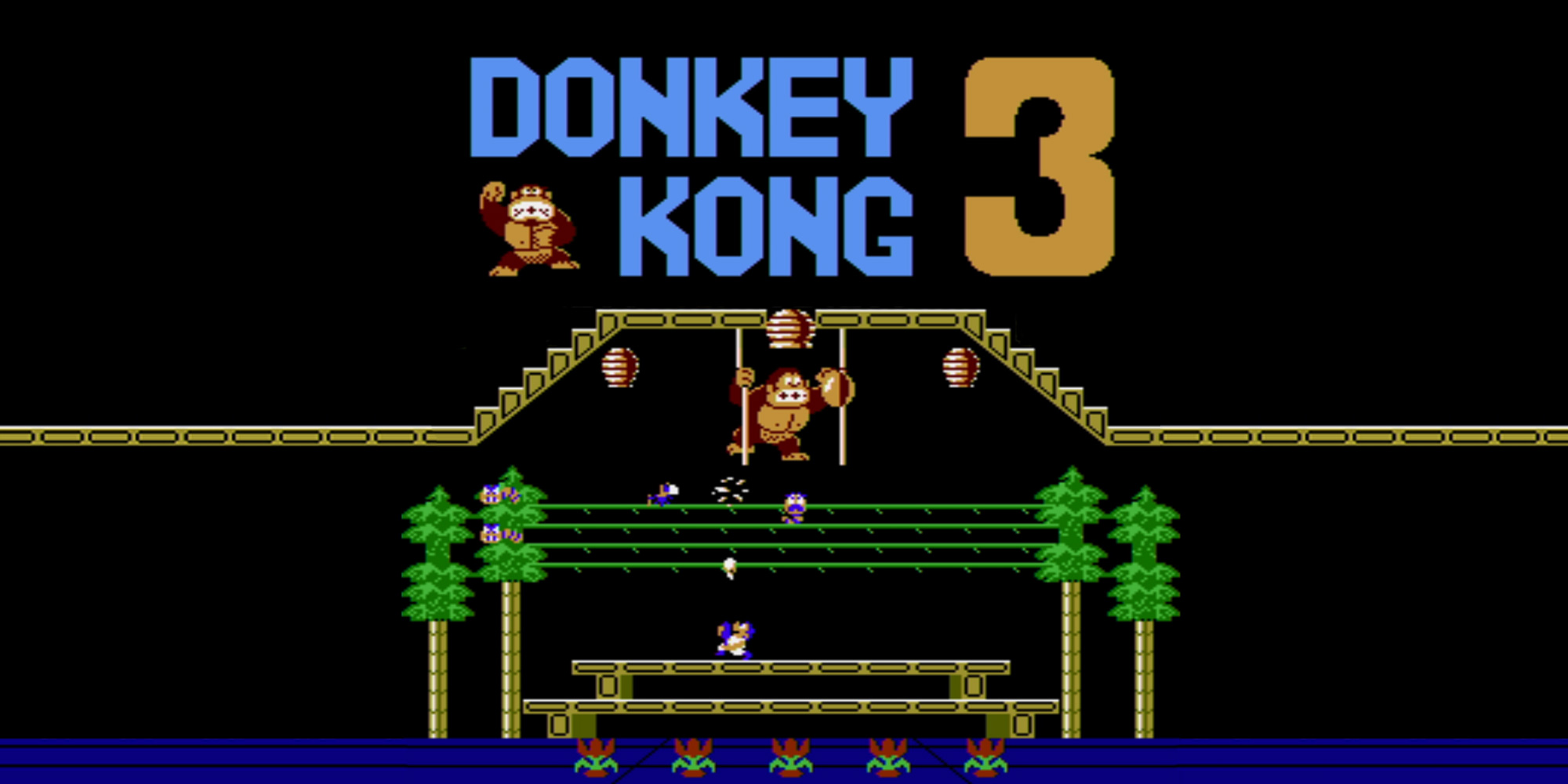 It’s time to look at the third Donkey Kong game. This one brings yet another new gameplay style into the mix. It’s pretty impressive how Donkey Kong would keep switching things up. It definitely ensures that the players will always have a new experience. I liked the style, but as with the first two games it is extremely short and it’s really hard to even say what the general plot is. The game starts looping before a plot can even really begin which does make things tricky.

Well you’re playing as a guy with a blaster. You have to blast DK back up into the trees when he tries to get down. That sounds easy enough right? Just keep blasting and you’ll have the levels over in a snap. The main obstacles that try to get in your way here as little insects that are running around. They try to jump in front of your shots to protect DK. The key is typically to blast them before they get close or ignore them and try to beat DK first. That’s really it. You can jump of course and I recommend it to get the blasts in a little quicker. That’s the extent of the gameplay though and before long you will be all done. Then you can just keep replaying the levels til you get bored or lose. The levels do continue to get more and more difficult with each cycle so you don’t have to worry about lasting forever.

As mentioned, I did like the gameplay. It’s interesting to see Nintendo come up with more of a shooter gameplay style since most of their games don’t work with that as much. They did have Metroid though so it’s not like it is completely unheard of. It’s definitely on the repetitive side though because there aren’t very many different enemies to worry about and the levels are so short. After a little bit you’ll feel like you’re in the cycle so it’s not surprising that this game never got quite as big as the first two.

As for the soundtrack, it’s definitely pretty good. It has that old Nintendo feel about it. The graphics are also good. I like the colorful enemies here and the nice backdrops. Nintendo always delivers here. It’s just a shame we couldn’t get more of an ending cutscene or something to make the game feel like it had a proper conclusion. Without that the loops feel a little more on the pointless side because you never see anything end which is pretty unfortunate.

One thing that would have made a real difference here is one extra level in the loop. In this one maybe there would be no insects and it would just be DK throwing barrels at you. The goal would be to to blast away at him while dodging his attacks until he is all the way up. That would feel more like a real end to each cycle and increase the stakes quite a bit. Trust me, doing that would definitely go a long way to making the game more memorable as well as more enjoyable.

Overall, Donkey Kong 3 is a game that has pretty much been forgotten to time. If you don’t have the Switch Online then chances are that you’ll never come across this game. It’s a shame but sometimes that is just how the ball bounces. I’d say you should give this game a quick play if you have the Switch. You should be able to beat it in about 15 minutes or less and then you can say that you’ve played one of the original Donkey Kong games. Pretty sweet deal right? I’d say it is at least. Who knows, maybe one day we’ll get a proper Donkey Kong 4 or something like that. It’s been a long time since the games used these various styles.