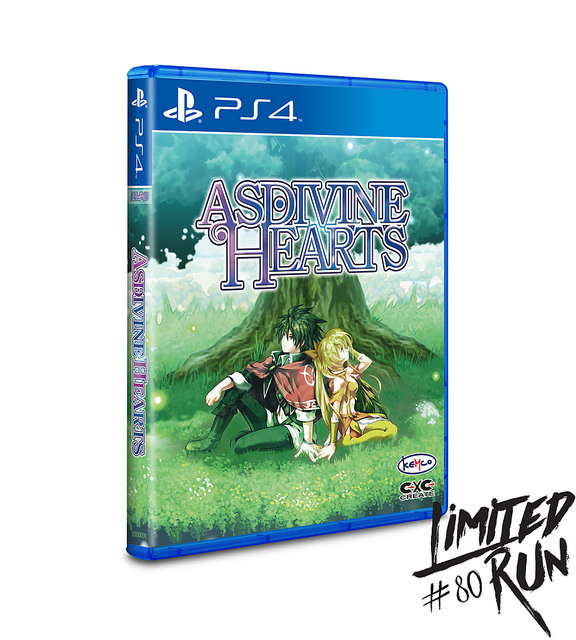 It’s time for another installment from Limited Run games. It’s had a pretty good run so far and this is probably the best game they’ve ported yet. It’s a classic RPG with all of the old elements in tact. It started out as a mobile game which explains why they didn’t mess around with the formula too much. Maybe it’s just me, but I think you only need the core aspects of an RPG to do well. A solid leveling up system, a map, and a convenient way to heal/save. As long as you have that then you’re okay. Modern RPGs sometimes get lost in all of the extra features that take away from this basic concept. This title pulls it off flawlessly.

The game starts off with the Light and Dark gods fighting it out. (Okay, a little cliche, but who doesn’t like a classic Good vs Evil theme?) The Light god is defeated and falls to Earth where she possesses a cat. This takes us to our heroes Zack and Stella. They grew up in an orphanage and are now getting ready to head to the outside world so they can earn money and support the other orphans. As they traverse the forest, they notice their cat change. It wasn’t very subtle since the Light goddess loves to talk. They call her Felix since that was the cat’s name. They also don’t believe her story about being all powerful after all, but I don’t blame them since Felix basically has no power for most of the game due to possessing such a small animal. The fate of the world now rests with these two teenagers and their pet cat goddess. Can they really stop the Dark god from destroying the world?

There are a lot of twists and turns in the plot, but I’m trying to avoid them to you can see for yourself. In short, the Dark god has his reasons for doing this even though the two gods used to be best friends. I don’t agree with them at all though as even being sympathetic is a stretch. It’s one of those cases where the whole game would have been averted if there had been a little more communication between the characters. I’d also say that he went off the deep end either way so you just can’t defend him. Felix was surprisingly shady as well, but she finally learned the values of friendship.

The gameplay is your classic turn based combat. You can use physical skill attacks or magic against foes. I used magic for the first 70% of the game until I found out that skills are actually far more powerful. I recommend focusing on those but always have a magic stone equipped so you can learn new spells. Uriel and Stella’s are especially helpful since they weaken a boss’ defense and attack. It’s a simple gameplay style but you always learn new things. I had been using Stella’s final smash throughout the game since it restores everyone’s HP and MP, as well as increasing all of their stats to the max, but little did I know that Uriel’s is even better. I used it against the Final Boss and he was frozen for almost 20 turns. It was crazy and that Final boss was definitely unforgettable. He had a similar move where he’s paralyze you for the whole fight so it was merely a question of who used the ability first.

Be warned that whenever you flee a monster encounter you lose some final smash meter. (9% to be exact) My strategy was to run until I made it to the end of the dungeon. There is always a save point near the end which tells you that a boss is up ahead. Then I’d quickly fight a bunch of monsters to get my full meter back and then fight. The save point heals your HP and MP as well so this way you don’t have to waste any items on the way. You will almost definitely need to do some serious grinding before you finish the game, but it goes by pretty quickly here. The enemies give you a lot of EXP.

Also, make sure you break any rocks that you see by the enemies. They have a chance to have 3 AHP points within them. You can save up to 20 of those to buy a 20% up EXP item for a character or save up to 100 points so you can have a full team revive during a boss fight. I went the whole game without getting 100 so I’m glad I just went for the EXP right away, but it depends on how you play. I’m sure there is a way to find more rocks, but you can’t find out much from the game online. It’s just trial and error so these are the paths that worked for me. As you can see, the gameplay was simple, but pretty detailed. I could spend a while just talking about that aspect, but you get the idea.

Zack is a solid main character. He’s your classic adventurer who rushes into danger and is always confident in his skills. He’s a nice guy but doesn’t tend to be very formal so all of the characters call him out on this. I’d think that formalities wouldn’t matter much when the planet is at stake, but evidently it is still a priority. He has to make some tough calls at the end, but chooses the right ones. I definitely have no qualms with Zack and he was an engaging protagonist to follow.

Stella is the main heroine and she’s pretty nice. Her unfortunate tendency to try whipping the main character when he’s being nice is a little suspect, but she actively tries to control herself as the game goes on. She’s a little more timid than the other main characters which is another part of her character arc. Based on her design in the sequel, she has learned to be more independent so it’ll be cool to see how she is there. She’s a good character even if she’s not a great one.

Celine is a high priestess who ends up joining the cast and becoming a main character. The fact that she knows hand to hand combat is certainly helpful. She also objects to Zack being nice to everyone all the time but gradually learns that he doesn’t mean it as an insult. I’d probably rank her last among the main heroines, but they’re all rather close. She just didn’t seem to bring as much to the table as the others and her subplot about lacking confidence didn’t really help matters.

Uriel is a mysterious girl who claims to know Zack from the past even though he doesn’t remember her. To pay Zack back for saving her life, she will now help him save the world. Her dark magic is incredibly useful in combat and she is the most loyal of the allies. She was my favorite member of the team and I relied on her Final Smash attack for the final boss. If I’d known it was so good, I would have used it sooner.

Felix is an intriguing character since she acts nothing like what you’d expect based on her role in the universe and character design. Instead of being a wise old lady who brings peace, she’s always insulting the humans and picking fights. She talks quite a lot and doesn’t follow any orders even if they’ll save a lot of trouble. It’s all about her pride here. She’s a fun character to have around since this results in a lot of banter. It was unexpected, but certainly in a good way. I already talked about the Dark god. He comes across as very whiny and completely unsympathetic so you’ll just think of him as another obstacle in the road. I preferred his two Legion generals.

Finally we also have the Dark Copies. The heroes end up travelling to a Mirror World towards the second half of the game where they meet evil copies of Zack and Stella. They were definitely interesting characters. I don’t like either of them, but they make for really good villains. It always ups the stakes when you find an evil version of yourself. They were also quite powerful and had some of the more challenging boss fights in the game. They were a great addition to the cast. You need human opponents like that once in a while because just having monsters isn’t as personal. Throwing in the humans shows that you can’t trust anyone in the mirror world.

There are a few supporting characters like the Queen, Lars, Luna, etc. They are fairly good. They add to the plot and come in handy, but aren’t really main characters. There are 3 different levels of characters here. The main characters who appear frequently and go on the missions. The supporting characters, these still have full character portraits like the main ones, but don’t get on the front lines. Finally, the non characters, the ones with names, but no accompanying picture. It was a pretty good way of knowing who was important and who wasn’t right off the bat.

The graphics look really clear and smooth. One positive for mobile games in general is that they don’t have the budget to add in the fancy stuff so they make the fields clear so the sprites that they do have look great. Throw in the PS4 resolution and this game really looks modern. There is absolutely nothing dated about the graphics and the character portraits are also high budget as opposed to the interesting Street Fighter V ones. I enjoyed the soundtrack. It’s noticeably limited as there are only 3-4 themes in the game for the most part, but fortunately they are catchy. I really enjoyed the main battle theme which plays for virtually all of the bosses. The game also did throw in a unique theme for the final boss which was definitely appreciated. I have no qualms with this area of the game.

There is a good amount of replay value here as you can try to get all of the PS4 trophies. During that process you can try to hit Level 600 with all of the characters and unlock the various endings. I got the normal ending, which I’m pretty satisfied with, but it would have been nice to have gotten the others. I thought I had enough of a trust level to get one of the bonus endings, but apparently not. The main game will last you over 25 hours as well so it’s not like the game even needed bonus content at all. It’s well worth the price.

Overall, Asdivine Hearts was a really fun game. The plot starts right away and even the intro which is probably the slowest part as you get the feel for the game was fun. A lot of that is due to the smooth gameplay, but the characters and story deserve a nod here as well. I definitely love RPGs since turn based combat/grinding is fun and you spend so much time in the story that you’re almost guaranteed to get to like the cast. The map in this game is also perfect so you’ll never get lost which is huge. I’m not going to say that this was one of the best RPGs ever, but it actually is pretty high up there. I hope the sequel ends up getting a PS4 release as well.