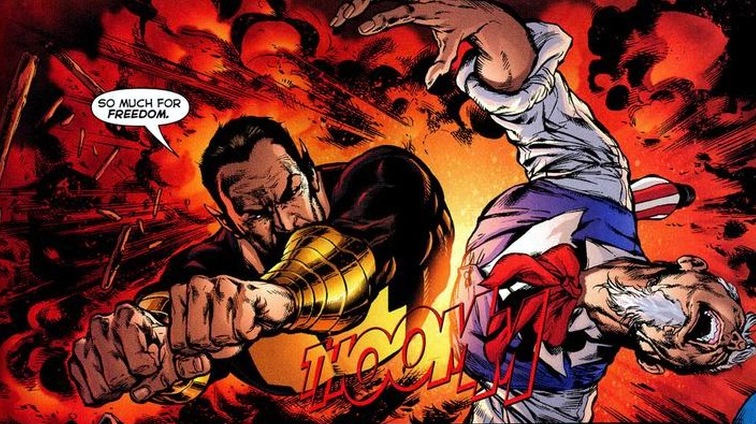 Uncle Sam is a powerful DC fighter but even he has his limits. He went up against Black Adam once before and it didn’t go so well. I don’t think a rematch would go much better either as Black Adam just has far better feats and more speed. He would easily be able to beat Uncle Sam up close and Sam has no real way of creating enough distance between them to come up with some kind of plan. Black Adam wins.

Suggested by iKnowledge Sanji used to be around the same strength as Zoro but then he didn’t eat anything to do for a long while. I started to wonder if it was possible that he didn’t have what it takes to defeat a foe such as Black Adam . Now that we’ve seen him fight a little more in the New World, I’m confident that he has the speed and power to keep Black Adam on the defensive. His Haki is sure to come in handy as well. It’ll be a reasonably close fight to be honest, but Sanji has got this. Sanji wins.

Suggested by IKnowledge This is a rare event…a DBZ (GT technically) character losing to a comic book fighter? You may think that this is madness, but let me explain. While Pan will likely realize her true Saiyan abilities at some point, we have never actually seen them. At the moment, her power level is actually fairly small and I don’t see her being able to keep up with Black Adam. She may put up a better fight than you’d suspect, but the victor would never be in doubt. She’ll have to hope that Dragon Ball Super does something with her character, but I wouldn’t count on it. Black Adam wins.

Suggested by iKnowledge Goliath is a powerful foe, but Black Adam is physically stronger. This proves to be a very bad turn of events for Goliath since his whole gimmick is that he’s really strong. He has no other special abilities to fall back on while Black Adam also possesses a great amount of speed at his disposal as well. He’ll be able to easily hit Goliath with an onslaught of blows at super speed and Goliath won’t be able to counter this. Black Adam wins.

It’s a battle of two of DC”s strongest fighters. Both of these guys could go toe to toe against Superman and their abilities are roughly equal. In a standard fight, Black Adam is typically a little stronger and faster. That being said, this is composite so the tides change quite a bit. Shazam once became Lord Marvel and his abilities were greatly enhanced. With this, Shazam destroys the gap between them and he is at a level where he could beat Black Adam. Shazam wins.

This is a tribute to Thor The Dark World. Thor didn’t look as impressive as he should have looked. Black Adam is an impressive DC villain and his power is almost on par with Superman’s. Thor wont have enough speed to win this battle against one of DC’s highest tier fighters. Black Adam may not be an extremely popular yet, but this win could boost his rank. Black Adam wins.

Black Adam is pretty powerful. One of DC’s top guys all right. But can he beat Superman? Nah! To Superman he’s just another guy with Super Strength, Flight, and Super Speed. Plenty of those guys in DC. Superman is superior in all 3 of those categories in case you were wondering. Black Adam may be powerful, but he just can’t take on the Man of Steel. Superman wins.