Suggested by iKnowledge Ariel is definitely a tough mermaid, but does she have enough skills to stop Rogue? It’ll be a very tough battle for her since she’ll need to win without making direct contact. I don’t think that will really be possible for her. Also, Rogue does have her natural super strength and speed which will really serve her well. Rogue wins. 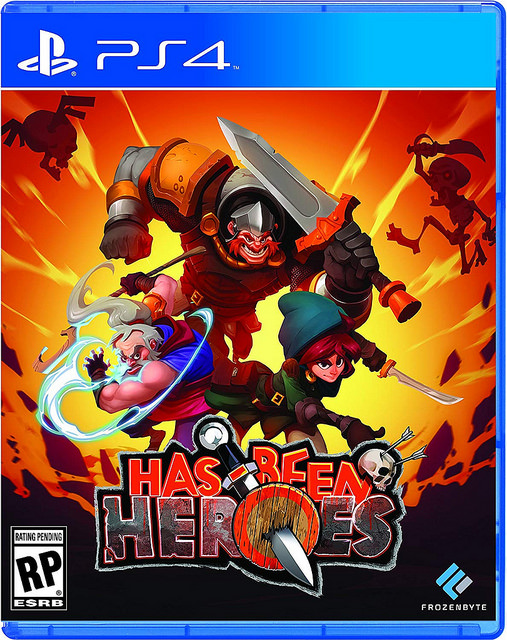 It’s time to look at what is likely my first Rogue game. The genre is definitely pretty interesting since it’s so unique compared to others. Here if you die you lose everything. Forget about keeping things like items, level ups, money, etc. If you die you start from scratch with nothing to show for it. It’s an interesting dynamic. Honestly I think I would prefer it if you got to at least get level ups or something since you would eventually be able to power your way to the end. Still, it’s steady stream of quick levels can be pretty addicting and you’ll find yourself wanting to keep playing “1 more round” over and over again.

The plot is pretty basic. There are a group of heroes who used to be quite impressive back in their day. Unfortunately for them they have grown old and people barely even remember them anymore. Well, they’ve been given one last mission. They have to escort these two princesses over to another kingdom. That should be easy enough but the world is overcome with monsters so maybe this won’t be quite as easy as they thought. Don’t worry about the plot much though as it doesn’t return again until you’ve beaten the game 6-7 times as you get the true ending. The rest of the endings don’t even finish the plot as they just unlock another character.

The gameplay uses a 3 lane system. You have a hero on the top lane, middle, and bottom. Each one can attack when his gauge is full. This is how you drain away at enemy’s stamina and then their health. You have to time it just right so you finish off the stamina and then damage the opponent in order to chip away at the gauge. Otherwise you won’t be making a whole lot of progress in the fights. It’s a very interesting system for sure and a complex one. Throw in the spells and then you’ve really got a lot to think about during the fights. Fortunately you can pause the game to think about your options but pause too often and you’ll just be taking up too much time. That’s the way I see it at least.

One nice thing about the game being so complex is that you can feel yourself improving as you go through the game. I lost my first 10 games before finally reaching one of the endings. From there it took me about 5 more tries to get the 2nd ending and then another 3 or so for the third one. There are 12 endings but if I kept up that pace maybe it wouldn’t have taken much longer. At the same time, it’s like Pac-Man as the more endings you get the longer the game becomes. That’s because the levels stack on top of each other so at first the game is 3 areas long, then 4, then 5, etc until it reaches 8. Naturally you can see why losing when you’re at area 6 or 7 during a late playthrough can be pretty rough. The bosses shuffle each time so you never really know who you are going to be up against.

There is also some luck involved as the shops and chests change each playthrough. On my final victory playthrough I got a good line up as I got the mind control spell, 2 water spells, and 2 little minions who would help me blast the enemies. On other playthroughs I just didn’t have enough money to do much of anything so I ended up falling behind the curve. My best recommendation is to fight as many battles as you can on the way to the boss to stock up on money so you can get as many items as possible. If you run out of money then you’re basically sunk. Always have a plan when going into a boss fight as well and don’t be afraid to pause if necessary. How you start a fight could very well determine how you end it. For my tip of the game I would recommend getting any spell that does direct damage to the opponents like the water blast. It’s incredibly different and can make all the difference in a fight.

The graphics aren’t bad. I like the illustrations we get for each ending. There was a reasonable amount of skill put into the drawings. The actual animations during gameplay aren’t anything amazing, but it looks pretty clear. You can usually tell what is happening. The only exception is the status effects that play whenever you hit a villain. There are way too many words and they go too fast so you can’t really tell what they are saying. That seems to maybe be intentional but certainly worth mentioning. The soundtrack is actually quite solid though. It has a good variety depending on the levels and is soothing enough to enhance the gameplay experience. The later levels seem to decline a bit based on the tracks I heard online, but it’s still quite good all around.

Naturally there is a lot of replay value here. If you want to get all 12 endings prepare to be here for over 20 hours. It depends on how quickly you get used to the gameplay and learn the tricks of the trade of course, but I wouldn’t expect to get the hang of it too soon. I can’t stress enough that this is a pretty difficult game. It’s no walk in the park by any stretch of the imagination. You’ll learn best through trial and error. There are also bonus modes like Challenge Mode, Seed Mode, etc. Getting through with everything will take a long time. I believe I got this game for around 10 bucks so that’s a lot of value for that price.

Overall, Has-Been Heroes is a pretty fun game. The story certainly takes a back seat as this is the kind of game that barely even has a plot, but the gameplay is the main thing here. The gameplay is smooth and a lot of fun. It may not be the most enjoyable experience at the very beginning if you just don’t get what you have to do, but as soon as you figure it out the sky’s the limit. I’d be up for trying more Rogue games out, but I still believe that they would be more fun with some actual progression. I want to feel like I’m getting closer to the goal with in-game features as opposed to just mastering the style more and more. It makes the whole experience just feel more rewarding.

Rogue is one of Marvel’s main power hitters from the heroines. A while back I would have said that she was The heavy hitter, but Ms. Marvel gives her some competition for that title nowadays. Rogue is powerful and her ability to absorb other powers is very useful, but I definitely give this round to Wonder Woman. She’s an expert hand to hand fighter who will be able to easily parry Rogue’s attacks and the gap in their actual levels of super strength is very vast. Wonder Woman also has the edge in speed so what this leads to is a big blowout. Wonder Woman wins. (And is more than a match for any Marvel character)

Original image by K-Bol. Link to the original is below.

Rogue is back and this time she’s up against Thor! Thor’s been winning a lot lately, but he may have met his match in this round! Rogue has the powers of many characters and by using them all together she can take down nearly any comic character! She already has Thor’s powers plus the Avengers, Xmen, Brotherhood, and others. She’s just too powerful! Rogue wins. 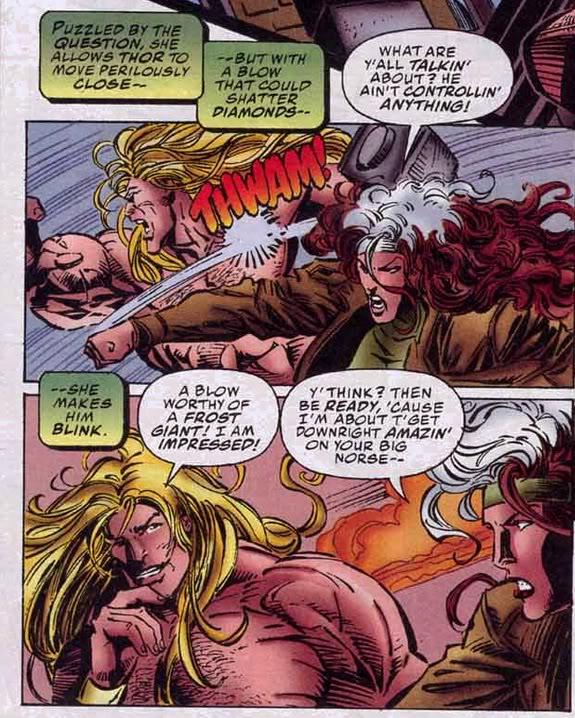 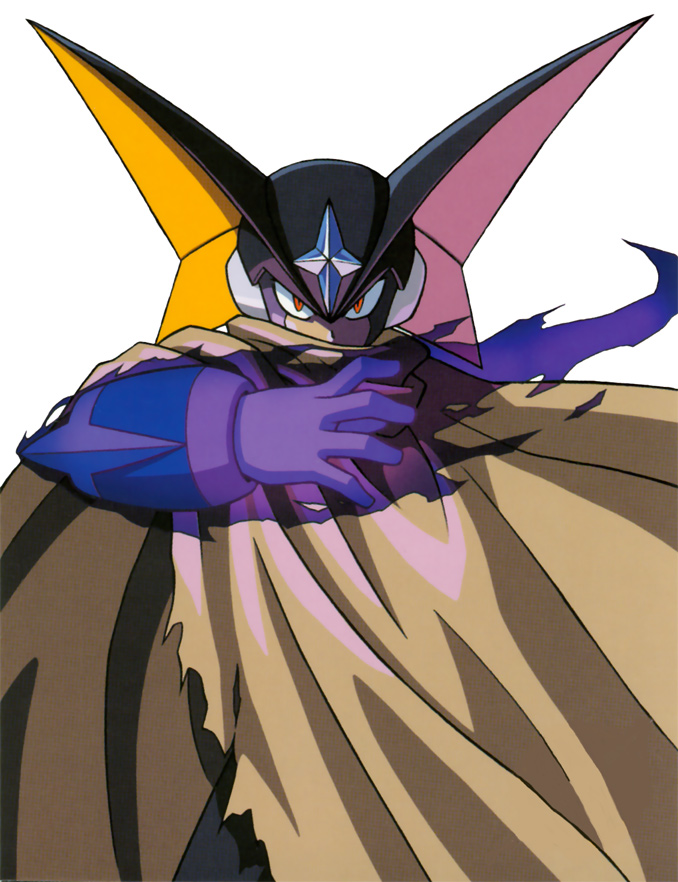 Rogue has super speed, strength, endurance, etc. Because of this she’s one of Marvel’s strongest fighters, of course Bass isn’t quite marvel level! He’s unstoppable! None in all of media can take him down when he’s trying. Bass is just far too powerful. With one blast he can take down any being. Bass wins. 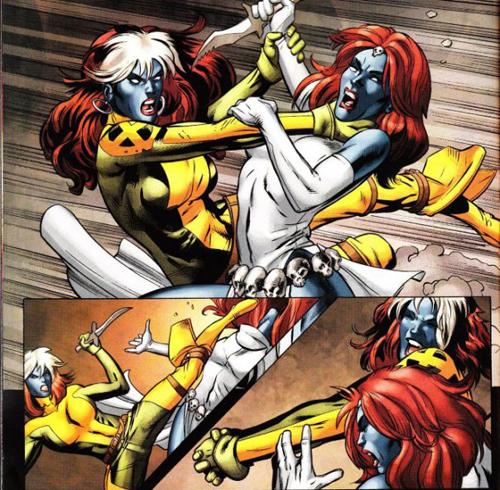 Mystique makes her blog debut. She has transformed into many characters over the years and her fighting skills have been shown to be pretty advanced. So while she is a very strong opponent, there are some she can’t beat. Rogue is much too powerful for her. Rogue has incredible super strength and is one of Marvel’s strongest fighters.

Rogue has gained the powers of dozens and dozens of beings in the past. Mystique never had a shot at defeating her. Rogue surpassed Mystique a long time ago and takes this win. Mystique will be back someday. Rogue wins. 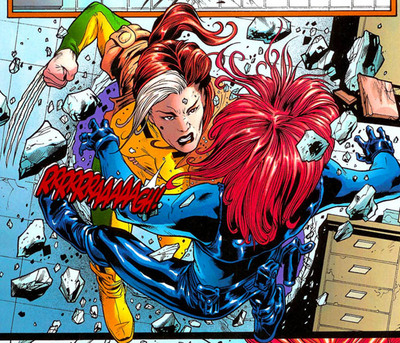 Rogue has more powers than I dare write. Gambit has his playing cards, but in the end he’ll be utterly crushed. Gambit just doesn’t have the speed or power to take care of Rogue. She’s too powerful in the end. Rogue wins. 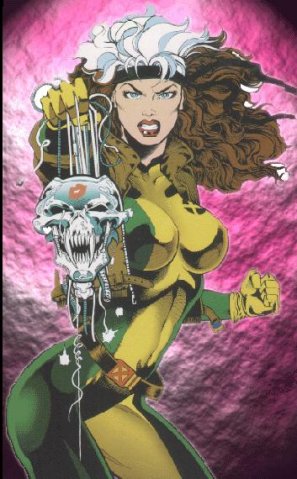 Rogue can absorb powers. She has so many powers currently that she could take down Toad. Toad may have his long tongue, but it won’t save him from Rogue’s Fire Blasts. Fire pwns Tongue. Rogue wins.

Well now Rogue is here to take down Wolverine. Wolverine just won’t be able to win this fight. He’s too badly outmatched. Rogue has too many powers at her disposal and won’t lose. Rogue wins. 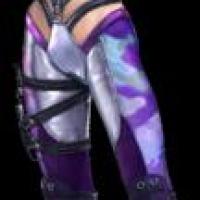 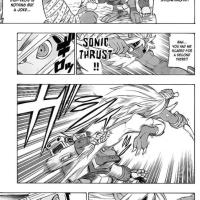